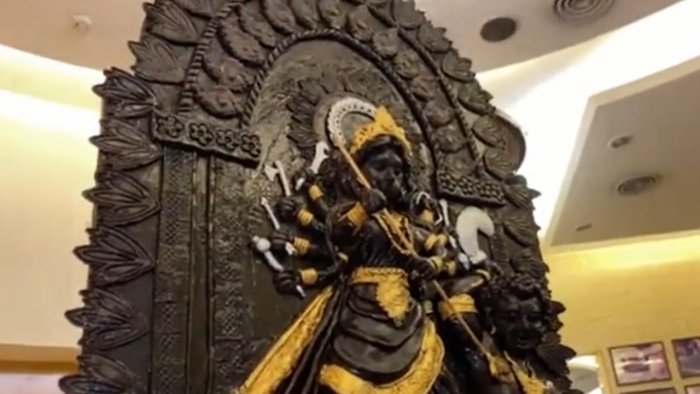 A leading bakery chain in Kolkata has made a 25-kg 'chocolate Durga', which will be 'immersed' in milk after Bijoya Dashami on Friday and the milkshake will be distributed among underprivileged children.

The handcrafted 4-foot-high Goddess Durga idol made of Belgian chocolate evoked tremendous curiosity among revellers who thronged its iconic original outlet on Park Street in large numbers during the puja days, a spokesperson of the bakery said.

It took chef Vikas Kumar and his team over a week to construct the idol after extensive research and visits to clay-modellers' hub Kumartuli in north Kolkata, he said.

The team used cocoa butter to give a solid base to the texture to prevent cracks from appearing and also to give an earthy look to the idol, the spokesperson said.

"After Bijoya Dashami, the idol will be immersed in a large milk container and the resultant milkshake will be distributed among poor children in central Kolkata. The initiative was the bakery's tribute to West Bengal's biggest festival," he added. PTI