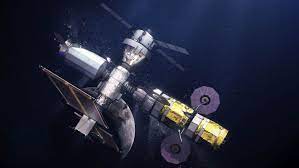 Artemis programme will carry humans to the Moon this decade

US space agency NASA has assembled the first of its powerful Space Launch System (SLS) rockets, which aims to return astronauts to the Moon.

The engineers at Florida's Kennedy Space Center have finished lowering the 65m tall core stage in between two smaller booster rockets, the BBC reported on Saturday.

It is the first time all three key elements of the rocket have been together in their launch configuration, the report said.

The SLS, which is part of the agency's Artemis programme that will carry humans to the Moon this decade, will be launched later this year.

The Artemis-1 mission will send an uncrewed Orion spacecraft onboard SLS to the Moon, while Artemis II will fly with a crew in 2023.

They provide most of the thrust-force that propels the SLS off the ground in the first two minutes of flight.

Over Friday and Saturday, teams at Kennedy Space Center used a heavy-lift crane to first hoist the core stage, transfer it from a horizontal to a vertical position, and then lower it into place between the SRBs on a structure called the mobile launcher, the report said.

The mobile launcher allows access to the SLS for testing, checkout and servicing. It will also transfer the giant rocket to the launch pad.

NASA said that SLS is the only rocket that can send the Orion spacecraft, astronauts, and supplies to the Moon on a single mission. The exploration of the Moon with NASA's Artemis programme includes preparations to send astronauts to Mars as part of America's Moon to Mars exploration approach. IANS