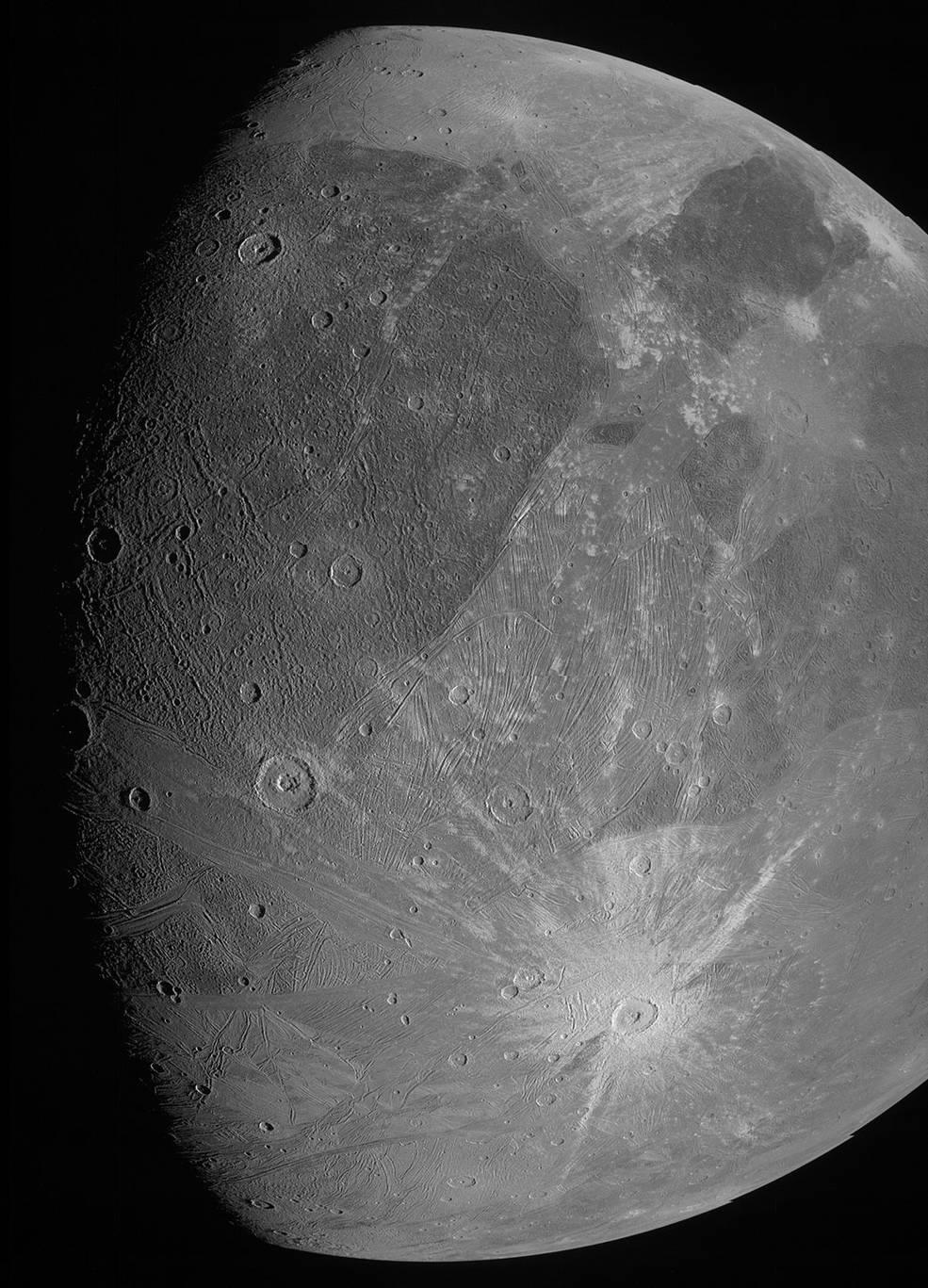 This image of Ganymede was obtained by the JunoCam imager during Juno’s June 7, 2021, flyby of the icy moon. Credits: NASA/JPL-Caltech/SwRI/MSSS

After flying closer to Jupiter's largest Moon than any other in more than two decades, NASA's Juno spacecraft has sent back two images offering dramatic glimpses of the icy orb.

During the flyby on June 7, Juno came within 645 miles (1,038 kilometres) of the surface of Jupiter's largest Moon Ganymede and took two images from the Jupiter orbiter's JunoCam imager and from its Stellar Reference Unit star camera.

"This is the closest any spacecraft has come to this mammoth Moon in a generation," said Juno Principal Investigator Scott Bolton of the Southwest Research Institute in San Antonio, in a statement.

"We are going to take our time before we draw any scientific conclusions, but until then we can simply marvel at this celestial wonder," he added.

Using its green filter, the spacecraft's JunoCam visible-light imager captured almost an entire side of the water-ice-encrusted Moon. Later, when versions of the same image come down incorporating the camera's red and blue filters, imaging experts will be able to provide a colour portrait of Ganymede. Image resolution is about 0.6 miles (1 kilometre) per pixel.

In addition, Juno's Stellar Reference Unit, a navigation camera that keeps the spacecraft on course, provided a black-and-white picture of Ganymede's dark side (the side opposite the Sun) bathed in dim light scattered off Jupiter. Image resolution is between 0.37 to 0.56 miles (600 to 900 metres) per pixel.

The spacecraft will send more images from its Ganymede flyby in the coming days.

Ganymede is bigger than the planet Mercury and is the only Moon in the Solar System with its own magnetosphere -- a bubble-shaped region of charged particles surrounding the celestial body.

The solar-powered spacecraft's encounter with the Jovian Moon is expected to yield insights into its composition, ionosphere, magnetosphere, and ice shell while also providing measurements of the radiation environment that will benefit future missions to the Jovian system. IANS