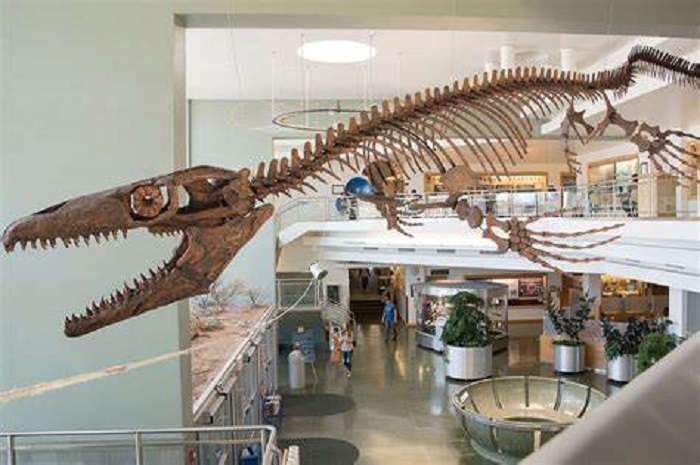 A cast of the mosasaur Gnathomortis stadtmani's bones mounted at Brigham Young University's Eyring Science Center are seen in Provo, Utah, U.S. in an undated photograph. BYU/Handout via REUTERS

Roughly 80 million years ago in the shallow inland sea that once split North America into eastern and western land masses, a fearsome 33-foot-long (10-meter-long) marine reptile with powerful jaws and tremendous bite-force was one of the apex predators.

A type of seagoing lizard called a mosasaur that ruled the oceans at the same time dinosaurs dominated the land, it has now been given a name meaning “Jaws of Death.”

A new analysis published on Wednesday of fossils of the creature unearthed in 1975 has determined that it deserves to be recognised as a new genus of mosasaur based on skeletal traits including a unique combination of features in the tooth-bearing bones and the shape of an important bone in the jaw joint.

Its remains were discovered near Cedaredge, Colorado.

This Cretaceous Period creature previously had been classified as the species Prognathodon stadtmani. Because of its differences from other species of Prognathodon, Joshua Lively, curator of paleontology at the Utah State University Eastern Prehistoric Museum, gave it the new scientific name Gnathomortis stadtmani.

Gnathomortis is derived from the Greek and Latin words for “Jaws of Death.”

After other marine reptiles like ichthyosaurs and pliosaurs went extinct, mosasaurs terrorised the oceans.

“In general, mosasaurs actually filled a lot of roles in the oceans over the last 15 million years of the age of dinosaurs,” Lively said. “Some specialised in eating clams, some were fish specialists, and others were clearly macropredators that could devour anything smaller than them. This mosasaur was one of the latter.”

“If you were an animal in the oceans less than 20 feet (6 meters) in length, you are most likely on the menu for Gnathomortis,” added Lively, whose study was published in the Journal of Vertebrate Paleontology. Reuters

That menu, Lively said, may have included sea turtles, fish, sharks and other marine reptiles including smaller mosasaurs.

Like other mosasaurs and many lizards and snakes, it boasted an extra set of teeth on the roof of its mouth.

A large depression on the outer surface of its lower jaws is indicative of large muscles that gave it tremendous bite-force. While it lived alongside even-larger mosasaurs like 46-foot-long (14-meter-long) Tylosaurus in the Western Interior Seaway that ran from present-day Canada to Mexico, Gnathomortis had stronger jaws.

“‘Jaws of Death’ seemed appropriate for this kind of critter,” Lively said, “and it turns out to be an awesome name.”

Reporting by Will Dunham; Editing by Sandra Maler