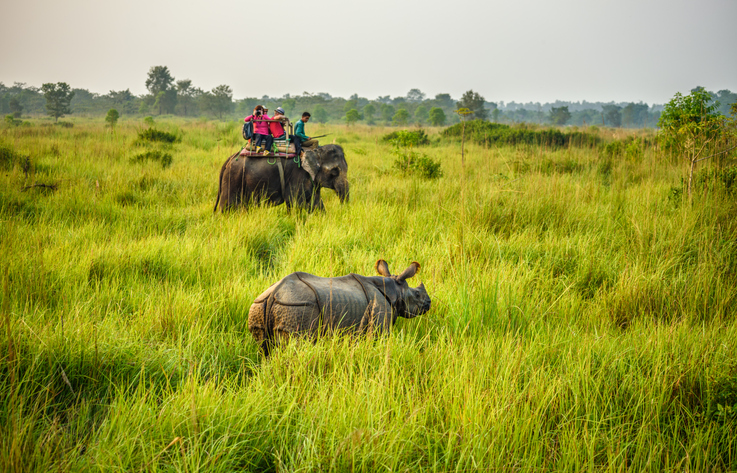 A four-month-old Ganga had lost her mother to surging waters of the Brahmaputra nearly two decades back, but she has now found her home on the banks of another river and is a healthy mother of four young ones.

Orphaned by the floods in Assam's famed Kaziranga National Park, Ganga had found a refuge on the periphery of the Park where she was raised before setting out to live on her own in her natural habitat.

Ganga was the second rhino to be rescued by the Center for Wildlife Rehabilitation and Conservation (CWRC) in Kaziranga in 2003, along with another rhino calf, Rathin Barman of Wildlife Trust of India (WTI) told PTI.

Hand-raised by the staff of the CWRC, the pair was translocated to Manas National Park (MNP), about 300 km away from their birthplace, four years later where they have thrived over the years.

Named Ganga-Jamuna for their bonding by the frontline staff of MNP, they were the second lot of rhinos sent to the Park with the first being Mainou (Lakhsmi in local Bodo language) preceding them by a year to Manas, also from the CWRC.

While Ganga gave birth to her fourth calf in the last week of July this year, Jamuna has three calves of her own and Mainou had also become mother to three calves over the years before dying of natural causes a couple of years back, Barman said.

The Center was established by Government of Assam, Wildlife Trust of India (WTI) and International Fund for Animal Welfare (IFAW), with the support of Government of India, in 2002.

It is located at the periphery of the Kaziranga National Park and attends to wildlife displacements originating mainly from the Park and adjoining Dibru-Saikhowa National Park.

The Center has been engaging in rescue of wildlife that stray out of their natural habitats and rhinos of KNP have been among such animals that have found a new lease of life in its premise. It has handled 101 rhino cases since its inception.

There are close to 3,000 rhinos in Assam, with the major numbers present in Kaziranga National Park.

"The CWRC annually rescues two to four rhino calves during floods in the KNP. In 2016, we rescued as many as nine rhino calves," he said.

The rescued rhino calves from KNP have been mostly translocated to the MNP, while two were ‘experimentally' released in KNP itself and two sent to the state zoo's breeding facility at Guwahati, Barman said.

The CWRC has four rhino calves rescued during the 2019 floods at its establishment at Kaziranga currently, Dr Bhaskar Choudhury, veterinarian at the Center said.

He said the calves are kept at the Center till they are about one-and-a-half to two years of age, after which they are released back in the wild.

The rhinos are generally not released back into KNP due to high tiger concentration which leads to high predation and high rhino density in the Park, he added.

"We bring the rhinos to the Center only if they are too young or ailing. Else, along with the Forest personnel, we try to send them back into their original habitat," Choudhury said.

Since the inception of CWRC and its satellite facilities, altogether 7,532 numbers of wildlife cases, belonging to 258 species of mammals, birds and reptiles, have been attended to by the Center in the state till July 2021.

Of these, 22% were mammals, 36% birds and 42% reptiles. Overall, 62% of the animals attended to by the team in Assam have been released back to the wild. PTI