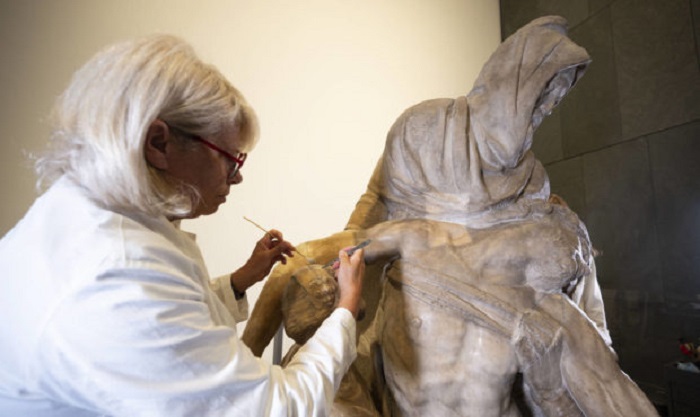 A restorer works on one of Michelangelo’s Pieta sculpture in Florence, Italy. A restoration of one of Michelangelo’s Pieta sculptures has uncovered previously unknown details, including the artist’s tool marks, that had been hidden under centuries of dust and wax. Florence’s Museo dell’Opera del Duomo said that the cleaning of the Bandini Pieta, which began last year but was suspended because of the coronavirus pandemic, had resumed and that the public was now invited to watch restorers at work.

A restoration of one of Michelangelo's sculptures of the Madonna and Christ has uncovered previously unknown details, including the artist's tool marks, that had been hidden under centuries of dust and wax.

Florence's Museo dell'Opera del Duomo said on Wednesday that the cleaning of the Bandini Pieta, which began last year but was suspended because of the coronavirus pandemic, had resumed and that the public was now invited in small groups to come watch restorers at work.

The cleaning, the first known restoration of the sculpture, is painstaking: Restorers are using cotton swabs dipped in deionised hot water to dislodge the accumulated scum from the crevices of the huge piece of Carrara marble.

Michelangelo carved the Bandini Pieta between 1547-1555, when he was nearly 80. It's the third known Pieta by the Renaissance master. An earlier one is in the Vatican, near the entry of St. Peter's Basilica, and a later version, known as the Rondanini Pieta, is in a museum in Milan.

The Florence museum said that unlike the other two Pietas, where Christ's body is held up only by his mother, the Christ figure in the Bandini Pieta is held up also by Mary Magdalene and the biblical character Nicodemus, whose face is a self-portrait of Michelangelo himself.

Michelangelo had intended the sculpture to be placed in a Rome chapel near where he envisaged having his tomb. But the museum said he eventually abandoned the work and even tried to destroy it before giving it to a servant who had it repaired. AP