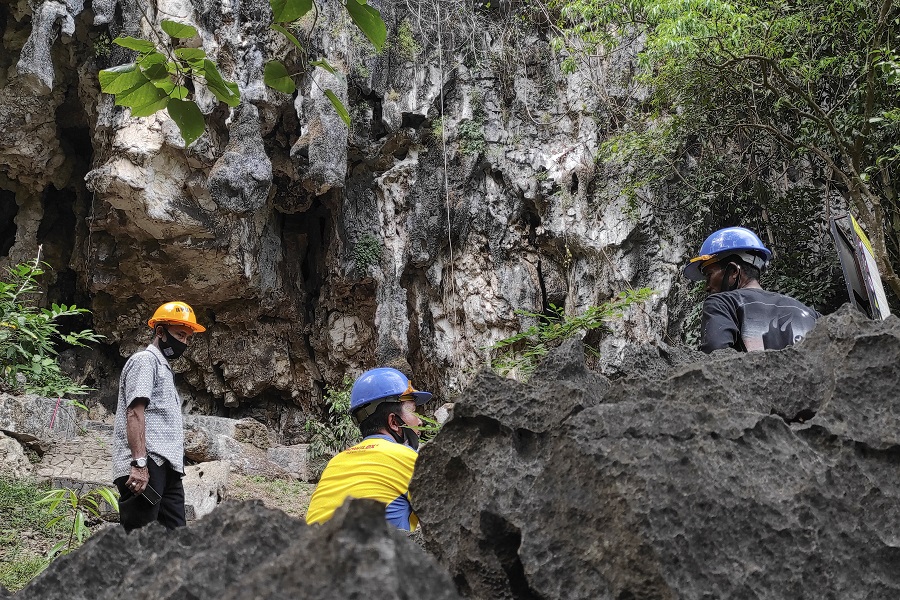 Archeologists gather while inspecting the worlds oldest limestone cave painting, thought to be dated to at least 45,500 years ago, which is decaying at a rapid pace due to climate change, in Maros regency, South Sulawesi province, Indonesia, May 27, 2021. (REUTERS/Abdul Rahman Muchtar)

A cave painting on the Indonesian island of Sulawesi, believed to be the world's oldest, is decaying at a rapid pace because of salt erosion likely caused by climate change, archaeologists have warned.

The painting of a group of therianthropes, or humans with animal characteristics, appearing to hunt animals was found in a limestone cave in 2017 and dated to nearly 44,000 years ago.

Experts are now racing against time to find ways to preserve the priceless Pleistocene artwork.

"The impact is very severe and will destroy the paintings," Basran Burhan, an archaeologist from Australia's Griffith University, told Reuters after inspecting the painting at Maros.

Warming temperatures and the increasing severity of El Nino events has helped speed up salt crystallisation in the cave, effectively "exfoliating" the painting, according to a study by Australian and Indonesian archaeologists published in Scientific Reports last month.

"The pigment that makes up the image on the cave wall is peeling off," said archaeologist Rustan Labe, pointing at images on his laptop showing the scale of exfoliation between October 2018 and March 2019. The picture documentation showed 1.36898 square centimetres had peeled off within those six months.

Labe, who works at the Ministry of Education and Culture's Cultural Heritage Conservation Center, said archaeologists will work in small teams to monitor the growth of salt crystals and other tiny organisms on the cave wall.

"We will prevent and tackle the factors that might be a threat, and address the matter immediately," Rustan said. Reuters