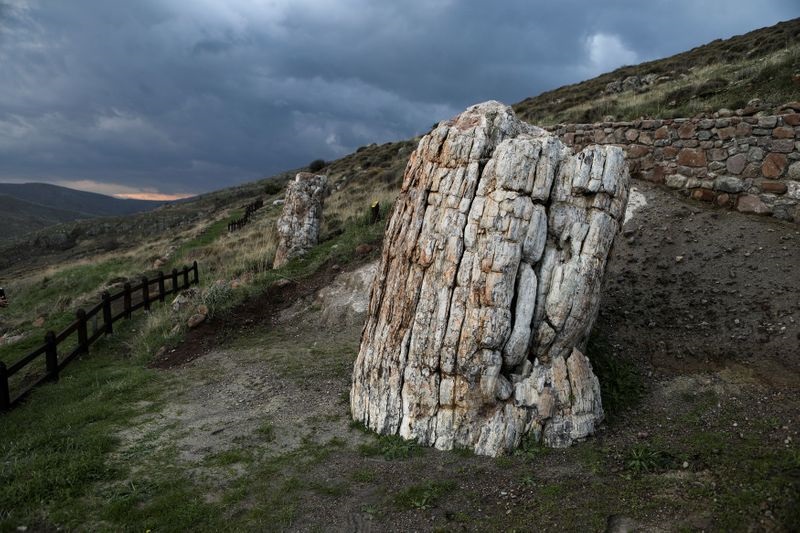 LESBOS, Greece: Greek scientists on the volcanic island of Lesbos say they have found a rare fossilised tree whose branches and roots are still intact after 20 million years.

The tree was found during roadwork near an ancient forest petrified millions of years ago on the eastern Mediterranean island and transported from the site using a special splint and metal platform.

It is the first time a tree has been found in such good condition complete with branches and roots since excavations began in 1995, said Professor Nikos Zouros of the Museum of Natural History of the Petrified Forest of Lesbos.

“It is a unique find,” he said. “[It] is preserved in excellent condition and from studying the fossilized wood we will be able to identify the type of plant it comes from.”

Lesbos’ petrified forest, a 15,000-hectare, UNESCO-protected site, is the result of a volcanic eruption 20 million years ago which smothered the island’s then subtropical forest ecosystem in lava.

The fossilised tree, about 19 metres long, was preserved by a thick layer of volcanic ash after it fell. A large number of fruit tree leaves were found in the same spot, adding to the picture along with animal bones from the general area.

“During the excavations the various forests that existed between 17 and 20 million years ago on Lesbos are being uncovered and we can reconstruct the ecosystem that existed during that period,” said Zouros. Reuters