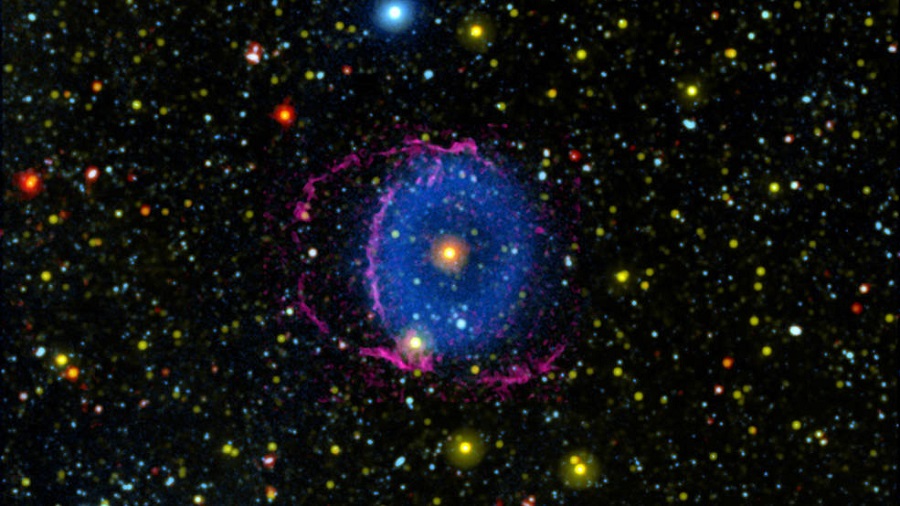 The Blue Ring Nebula consists of two expanding cones of gas ejected into space by a stellar merger. As the gas cools, it forms hydrogen molecules that collide with particles in interstellar space, causing them to radiate far-ultraviolet light. Invisible to the human eye, it is shown here as blue. Credits: NASA/JPL-Caltech/M. Seibert (Carnegie Institution for Science)/K. Hoadley (Caltech)/GALEX Team

After studying the mysterious Blue Ring Nebula with multiple Earth- and space-based telescopes for 16 years, scientists may have finally discovered what led to its formation.

The nebula -- a cloud of gas in space -- is likely composed of debris from two stars that collided and merged into a single star, said a study published in the journal 'Nature'.

The object was first spotted in 2004 when scientists with NASA's space-based Galaxy Evolution Explorer (GALEX) found that it was an object unlike any they had seen before in our Milky Way galaxy: a large, faint blob of gas with a star at its centre.

Though it does not actually emit light visible to the human eye, GALEX captured the blob in ultraviolet (UV) light and thus appeared blue in the images; subsequent observations also revealed a thick ring structure within it.

So the team nicknamed it the Blue Ring Nebula.

Over the next 16 years, they studied it with several telescopes, including W. M. Keck Observatory on Maunakea in Hawaii.

"We think there are probably plenty of young remnants of stellar mergers in our galaxy, and the Blue Ring Nebula might show us what they look like so we can identify more of them," said study co-author Brian Metzger of Columbia University in the US.

While merged star systems are thought to be fairly common, they are nearly impossible to study immediately after they form because they're obscured by debris kicked up by the collision.

Once the debris has cleared -- at least hundreds of thousands of years later -- they are challenging to identify because they resemble non-merged stars.

The Blue Ring Nebula appears to be the missing link: astronomers are seeing the star system only a few thousand years after the merger, when evidence of the union is still plentiful.

It appears to be the first known example of a merged star system at this stage, said the study. IANS