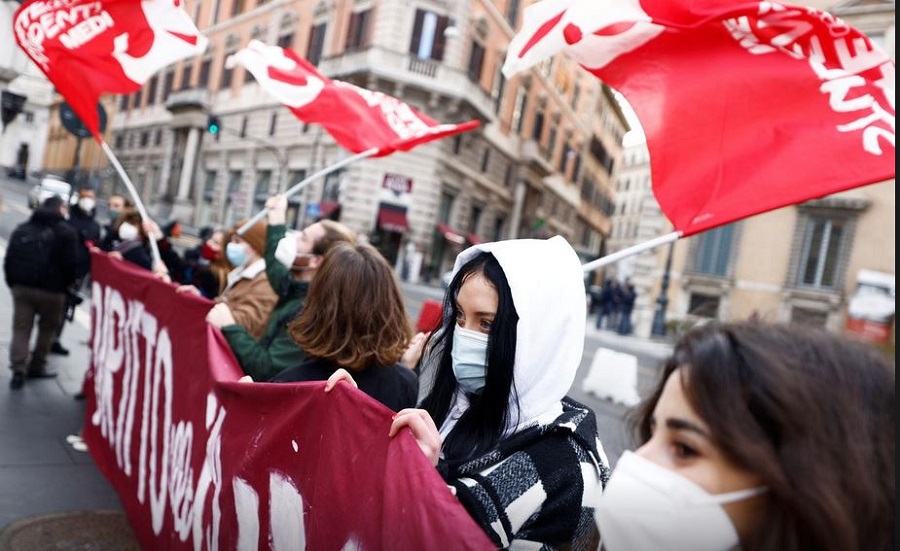 Students protest over the decision to keep high schools closed as part of efforts to curb the spread of the coronavirus disease (COVID-19) in Rome, Italy, on Monday. REUTERS

Dozens of students staged a sit-in protest outside their school in central Rome on Monday, urging the government to re-open the education sector across the country after most of its 20 regions extended closures to contain rising COVID-19 infections.

Italian schools reopened in mid-September after a six-month stop — the longest in Europe  — but face-to-face lessons in high schools across the country were gradually suspended again a month later due to a new surge in cases.

"School is crucial. We are asking for a safe return to face-to-face activities," student Emanuele Santori said during a demonstration in Rome outside his Cavour school under the shadow of the Colosseum.

Fellow pupil Ilaria Rinattieri added: "It is true we are young, but it is also true we will be the next electoral voters, workers and the citizens of tomorrow."

Last week the government said high schools could restart at 50% capacity as of January 11 but only 4 regions have re-opened.

Most regional heads said it was too early and ordered that the return to classes be postponed by several weeks.

"I have done everything I could do, the schools are ready to start but the regions have the ability to reopen them or not," Education Minister Lucia Azzolina told state broadcaster RAI.

"Distance learning is not working any more."

"Linking schools reopening to the zones system or to the whim of regional governors makes every decision unstable," parents committee 'A Scuola!' (To School!) wrote in a letter to newspaper Corriere della Sera. "As parents, teachers and citizens, we are tired." Reuters