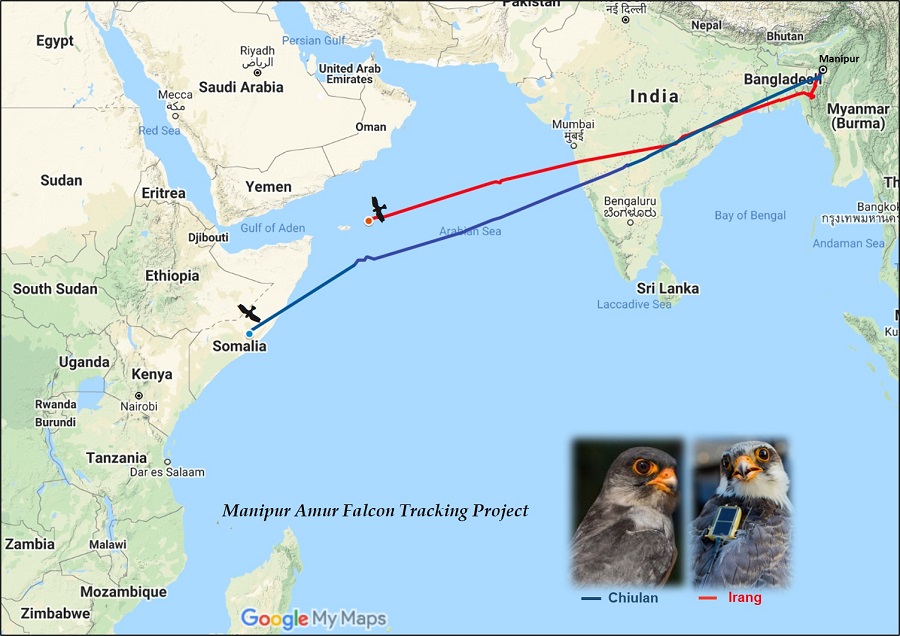 Flying thousands of kilometres from their breeding grounds in northern China and eastern Mongolia, nearly a million Amur falcons regularly descend across northeast India for nearly a month in October to feed and rest before continuing their journey to southern Africa.

Five Amurs were tagged with satellite transmitters last November in Manipur to identify their important migration routes in remote areas, two of these, who are now considered conservation ambassador for the locals, returned to that area in October after completing their migratory route and covering some 30,000 km.

After spending almost a fortnight in Manipur, both tagged birds headed to the southern parts of Africa after crossing the Arabian Sea.

“The two Amurs that are currently being tracked are named Chiulan and Irang. Chiulan is a male Amur that arrived in Somalia yesterday and Irang is a female Amur and may have also arrived in Somalia by now,” Suresh Kumar, one of the key researchers, told IANS on Tuesday. 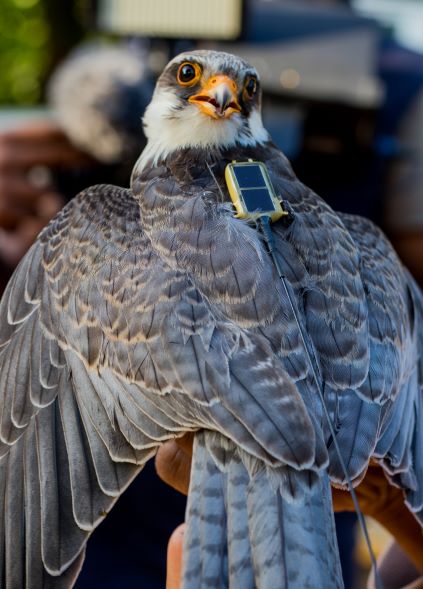 Kumar has been providing technical support in tagging and tracking Amurs to the Nagaland and Manipur’s Forest Department.

He has also been helping creating bird awareness, the major component of the project, in northwestern states that were once known for mass illegal harvesting of Amurs for consumption.

He said the two small birds had been captured and tagged on October 1, 2019, at Puching village, some 100 km from the state capital Imphal, in Tamenglong district.

“The bird named Chiulan reached Tamenglong on October 26 after a roundtrip of 33,000 km. After spending 15 days there, it started its non-stop onward journey on November 11,” he said.

During its journey Chiulan, named after a village, crossed several Indian states. It reached Somalia on November 16 at 5.30 p.m. This journey took five days and 13 hours. The bird crossed over the Arabian Sea by covering a distance of 3,000 km.

Meanwhile, Irang reached Manipur after a roundtrip of 29,000 km.

Two of the five transmitters installed last year have been working and airing data on their migration routes.

Kumar, who has attached satellite transmitters on 15 falcons in the past seven years, said the scientists now have a better understanding about the migratory routes of these birds. This also helps identifying their routes in remote locations.

Praising Kumar for conservation measures, the CMS said by 2013 authorities, religious leaders and youth groups had stepped in to persuade local people to provide safe passage to the birds before continuing their migration from Siberia, China and Mongolia onto the southern parts of Africa.

In the years following, the villagers themselves have adopted measures to punish those hunting these birds and to protect their habitat, it added. IANS

Each transmitter with a solar-charged battery weighs less than five grams and is tagged on an Amur whose weight ranges from 170 to 180 grams.

“The weight of a transmitter should be less than three per cent of the total weight of the bird. If it is slightly heavy, it will affect the natural behaviour of the bird,” he explained.

This tagging project was initiated first in Nagaland in November 2013 as an international collaborative effort to create awareness about Amurs among local people, and track its migration.

The 2016 project in Nagaland and subsequently in Manipur two years later was launched with the support of the Ministry of Environment, Forest and Climate Change.