The Temple with Musical Pillars : The Tribune India

The Temple with Musical Pillars 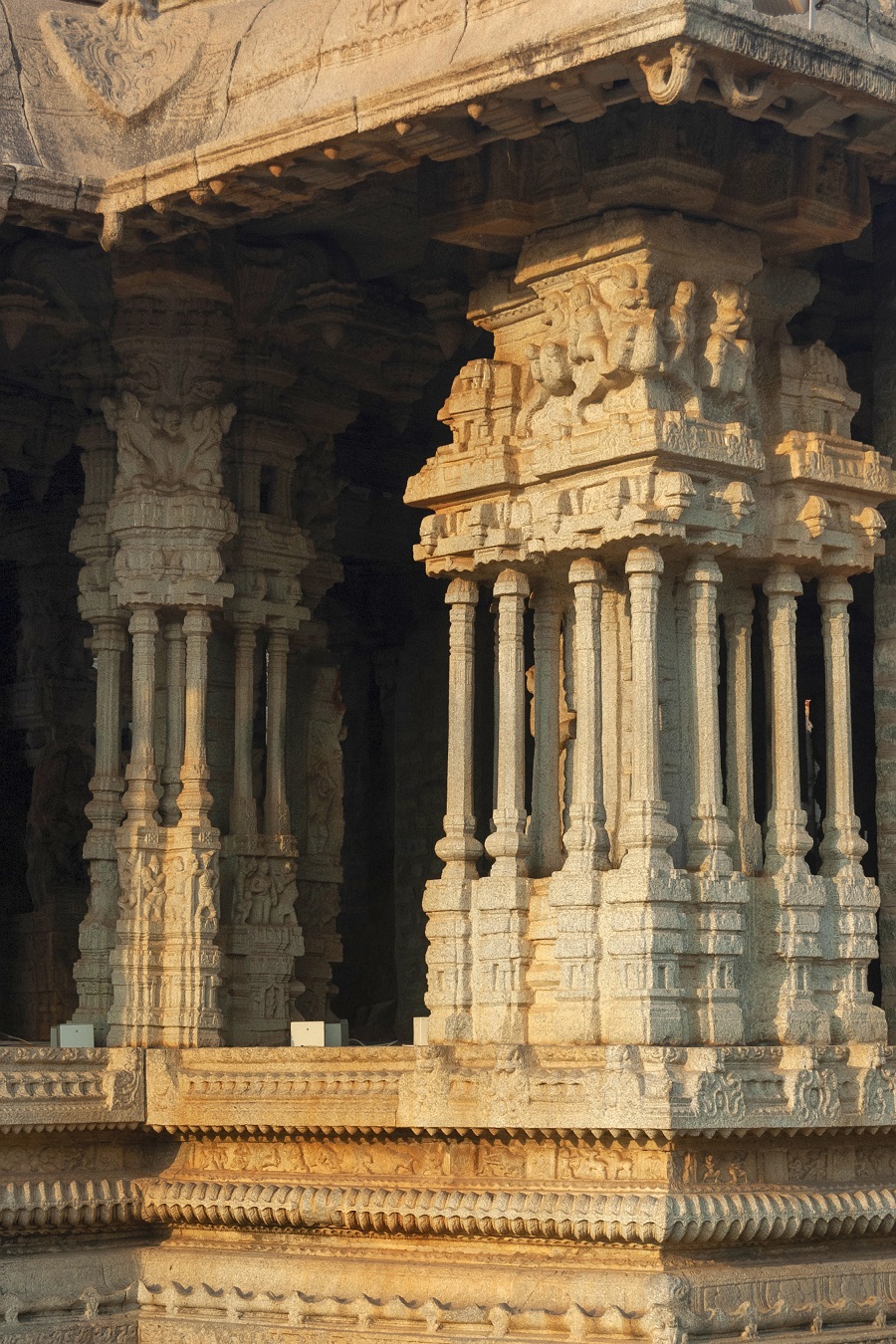 Sa, Re, Ga, Ma pillars? Yes! That is what the famous musical pillars in the Vittala Temple in Hampi are called. This temple is an ancient structure, well-known for its architecture and unmatched craftsmanship. The monument is easily one of the largest and most famous structures in the group of monuments in Hampi. Located in the northeastern part of Hampi near the banks of the Tungabhadra River, it is difficult not to be affected by the stunning beauty and workmanship that is showcased on these stones.

This area has many other beautiful stone structures too, like the stone chariot, the Goddess’s shrine in the northwest, the 100-pillared hall in the southwest, the Kalyana Mantapa (the ceremonial marriage hall) in the southeast and the pillared cloisters all around the enclosure wall. But the temple remains the major draw amongst tourists who come from across the globe to glimpse the once-glorious Vijayanagara capital, which lies in ruins now. Schools nearby also organize cycle rides to this monumental outdoor museum.

Just imagine what it must have been like to be living there, so many years ago. The monuments take you back to the early 15th century, when the structure was built during the rule of Deva Raya II (1422–1446), who was one of the more famous rulers of the Vijayanagara Empire, and sensitive to the arts and crafts. Krishnadevaraya (1509– 1529), the most famous ruler of the Vijayanagara kingdom, expanded the temple during his reign.

Hampi falls within the state of Karnataka, about 350 kilometres from Bengaluru. It is an absolute delight for any student or lover of history, archaeology, architecture or religion. Spread over 25 square kilometres, one would probably need a whole week to do proper justice to its many temples, palaces and other awe-inspiring stone monuments. On top of that, you have giant boulders strewn all over the terrain, as well as a river that bisects the area…

No wonder it is on the list of UNESCO’s World Heritage Sites.

One of the best ways to enter the Hampi grounds is from the eastern entrance tower. Very soon you will come upon the famous stone chariot, which shows up on practically any poster or book cover of these world-famous ruins. One look at that image and one immediately knows that Hampi is being referred to. The chariot is actually a temple, albeit a very unusual one. The stone chariot temple was dedicated to the Eagle God, Garuda, who is the vahana (vehicle) of Lord Vishnu. So, it is indeed befitting that this temple faces the main temple. If you lie down and peep under the chariot, you will be rewarded with the sight of a relatively well-preserved painting, typical of those times when art, music and dance flourished in the Vijayanagara kingdom. Being underneath the chariot, the painting was protected better than the rest of the sculptures of the Vittala Temple, which are said to have been covered with similar paintings. Can you imagine that these large wheels of the chariot would be turned by visitors a long time ago?

This temple, also known as the Shri Vijaya Vittala Temple, is proof of the immense creativity and architectural expertise possessed by the sculptors and artisans of the Vijayanagara Empire. The temple is built in the Dravidian style of architecture. One can imagine the sight of so many skilled sculptors chiselling away at massive chunks of stone, slowly turning them into the masterpieces that we see today.

The temple stands in a large rectangular enclosure of 164 metres by 94.5 metres. Aim to reach the main Mahamantapa (the Great Hall) as soon as possible. After all, for many it is the highlight of the visit. The hall, it is said, had been partially damaged by Mughal conquerors  in 1565. Obviously meant for the mighty and important, the Mahamantapa is literally on a higher plane — elevated and special.

Four open halls fall within the Mahamantapa. While the southern, northern and eastern halls are quite intact, the main hall has caved in a bit. The central western hall has collapsed. The main highlight of the Mahamantapa is its richly carved giant monolithic pillars. The outermost of the pillars are called the musical pillars.

The musician’s hall, which is the eastern hall, has elaborate sculptures of musicians and dancers on its walls. For some unknown and slightly bewildering reason, the southern hall is covered with sculptures of mythical creatures called Yalis — part lion, part elephant and part horse — somewhat incongruent to the rest of the art around.

Legend has it that this temple, which is dedicated to Vittala, an incarnation of Lord Vishnu, was originally built to serve as a home for Lord Vishnu in this particular incarnation. However, it is said that when it was completed, he found it much too grand for him and chose to return to his simple home in Pandharpur.

The large Ranga Mantapa, with its famous fifty-six musical pillars, emits musical notes when the pillars are gently tapped with one’s thumb. Sa, Re, Ga, Ma are four of the seven musical notes as per Indian classical music, the rest being Pa, Da, Ni. Each pillar is 3.6-metres high and made of solid granite. These huge pillars also provide vital support to the roof of the mantapa.

The main pillars are designed as musical instruments and every main pillar has seven minor pillars that emit musical sounds. Every note coming out of these pillars varies in its sound quality and also changes as per the percussion, string or wind instrument being played.

ALSO READ: Khooni Darwaza — The gate with a blood-stained history

Now let us think aloud: How do these pillars of the same material create different sounds? Were holes created in the granite? If so, that would explain the various sounds that the pillars produce. The British tried to figure this mystery out by cutting one of the larger pillars and one of the smaller ones too, to get to the bottom of this mystery. But there was no revelation, because all the pillars were the same— solid rock!

Scientists from the Indira Gandhi Centre for Atomic Research in Kalpakkam, Tamil Nadu, conducted the first scientific investigation on the acoustic properties of the musical columns in the pillars around 2006–07. The study was concentrated on the eleven most popular pillars. Non- destructive techniques such as low-frequency ultrasonic testing and in-situ metallography were used. The in-situ metallography revealed that the microstructure of the pillars were similar to a typical granite microstructure. The low-frequency ultrasonic and impact echo testing showed that all the musical columns are solid shafts.

Most of the musical instruments that the sounds from the pillars correlated to were percussion instruments like the Kerala mridangam, tabla, ghatam and damaru. The other musical sounds were that of the veena, jaltarang, shankha, ghanta, panchtala and saptaswara.