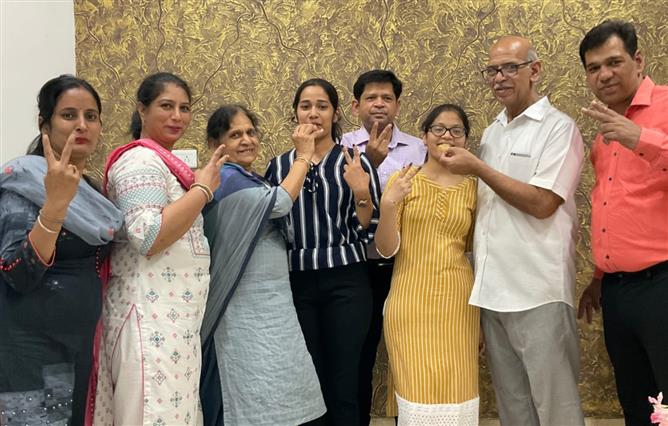 The joint family of Khushi and Himanshi, both 17-year-old and hailing from Barnala, was joyous as they came to know that they have emerged the toppers in the tricity.

The Covid-19 pandemic did not deter Khushi’s spirits as she chose to travel three hours just to appear for an offline pre-board tests.

“I used to leave home at 6 am and reach the school by 9 am to give offline exams. Although the option was available in online mode also, I wanted to test my preparations for the final board examinations. The pandemic did play havoc with the whole academic year. Nevertheless, I ensured that I revised everything taught in the class on that very day,” said Khushi.

Khushi said it was difficult for her to cope with the CISCE syllabus as she did her Class X from the CBSE board.

Himanshi, on the contrary, appeared for her pre-boards online but had started preparing in Class XI only by spending a few hours extra. “Covid didn’t affect my preparations but it did demotivate me because there was a lot of uncertainty related to exams.”

She added that she took class tests and assignments very seriously even if those were provided in online mode.

Noorbir Kaur Grewal also topped the tricity by securing 99.75 per cent in the humanities stream. She is a student of Yadavindra Public School (YPS), Mohali. She said she studied for five to six hours a day and wanted to pursue a law course and become a Judge.

Another student of YPS, Ranmeekjot Kaur, secured the second position in the tricity and topped the medical stream by securing 99.25 per cent marks. She wants to pursue MBBS and later go for the Indian Administrative Service by clearing the UPSC exam.

Sejal Trehan, also a student of YPS, scored 97.75 per cent to top the non-medical stream and stood third in tricity.

Sejal said she paid attention to classes and studied on weekends or holidays. She wants to pursue arts and become an IAS officer.

Four students from Tricity scored 99 per cent in Class X results announced by the Council for the Indian School Certificate Examinations (CISCE) declared on Saturday.

Aryan Chugh, a student of St Stephen’s School, Chandigarh, while sharing his success story said, “know everything but attempt only what you know the best. I used to study 6-7 hours a day and used to do coding during the free time.”

According to Chugh, Covid-19 pandemic helped him to study and prepare better during the academic year. “The video lectures were recorded and hence we could view the lecture again and again. Also, there were 24 hours doubt clearing sessions and teachers have been really cooperative in clearing all my doubts.”

Chugh’s hobby is playing cricket and coding. He aspires to be a software engineer and pursue non-medical stream in Class XI.

Jeevanjot, who is also a student of St. Stephen’s School, Chandigarh, joined toppers from the Tricity. She used to study for 5-8 hours a day. She appeared in offline mode during the preboard exams. She drew inspiration from her parents and want to crack the IIT JEE examination and pursue nonmedical in the next class.

Tanisha Gupta from Little Flower Convent School, Panchkula also topped by securing the same percentage. She had dedicated four hours a day to her studies. She aspires to take admission in Medical course and would prepare for NEET Exam

Another student of Little Flower Convent School, Panchkula, Anav Jain became the topper of the region. In his free time, he likes to read books, and play Lawn Tennis. He studies for 8 to 10 hours a day and will take admission in Non-Medical.