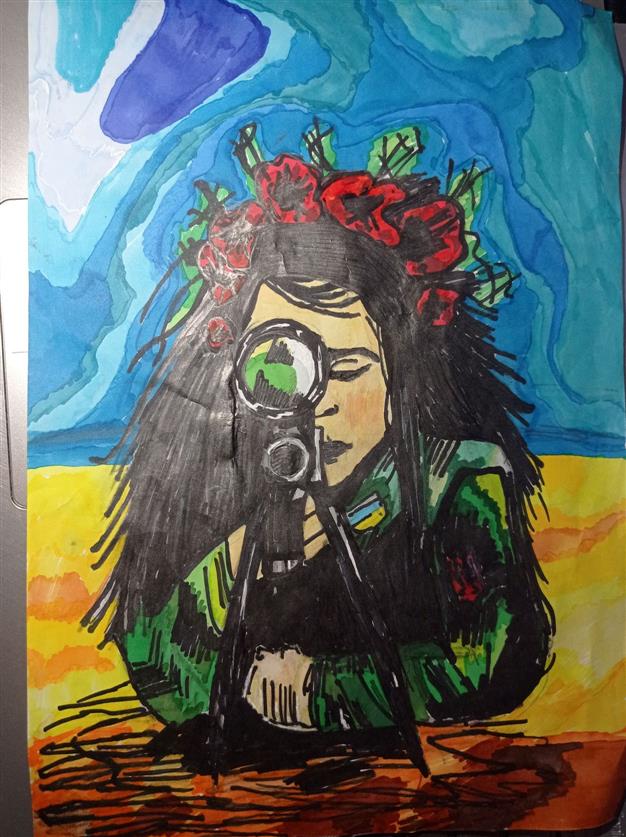 A drawing by a child living in Ukraine, as Russias invasion of Ukraine continues, is displayed at an unknown location, in Ukraine. REUTERS

One drawing shows a Ukrainian soldier looking through a rifle scope, red flowers crowning her long black hair. Another depicts a girl playing on a swing under a smiling sun - a happy scene but for the Russian bombers flying overhead.

Artem and Anastasiia Bykovets fled Ukraine's capital Kyiv when Russian troops invaded a month ago. On their 37-hour journey to the west of the country, they encouraged their six-year-old daughter to draw her thoughts, sparking the idea for an online gallery for children impacted by the war.

Since then, their Instagram account @uakids.today has amassed over a thousand followers and has posted dozens of pictures sent by kids caught up in a war that has engulfed the country. Many more have been published on their website.

"For them it's a great miracle," Artem told Reuters. "Like you’ve just drawn a picture for daddy or for your mum and after five minutes you can open a website and your picture is among hundreds of others from children from all over Ukraine, and they feel like a part of a bigger community."

Russia sent troops across the border on February 24 on what it calls a "special military operation" to demilitarise and "denazify" Ukraine. Ukraine and the West say President Vladimir Putin launched an unprovoked war on Russia's neighbour.

Cities across Ukraine are under siege and bombardments have reduced some residential areas to rubble. Hundreds of civilians have been killed, according to the United Nations. Russia denies targeting civilians.

The European Union calculates that about half of the 3.3 million Ukrainian refugees that have fled to EU countries are children.

The Bykovets, event organisers in their previous life, are holed up in a small hotel room with two children in western Ukraine. They are buoyed by the steady flow of drawings sent from Kyiv, Odesa, Chernihiv and Lutsk.

Some reveal idyllic scenes of peacetime Ukraine, of families in fields surrounded by flowers and trees. Others describe the conflict with planes and tanks and crayon dashes for bullets — a hint at the trauma the children endure.

When the war is over, Anastasiia and Artem plan to organise an offline exhibition showcasing the drawings. In the meantime they hope art can help.

"We feel a lot of emotions inside these small people, and they need a way to channel these emotions out," Artem said. Reuters