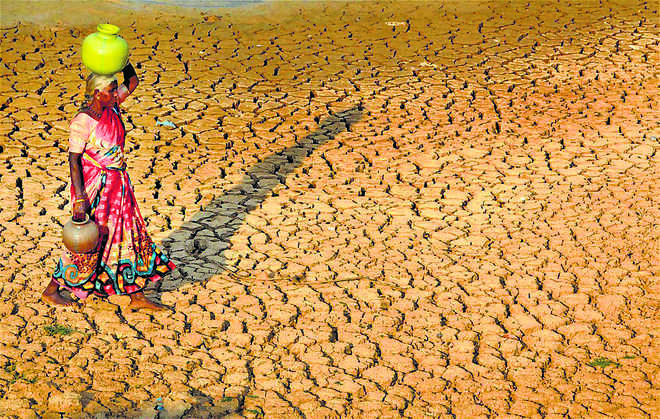 Climate change will increase the frequency of flash droughts in India in the future, which will have a negative impact on crop production, irrigation demands, and groundwater abstraction, says a study by researchers at Indian Institute of Technology (IIT) Gandhinagar.

According to the researchers, flash droughts occur due to rapid depletion of soil moisture.

In contrast to the conventional droughts, they said, flash droughts can impact a large region within two-three weeks, severely affecting crop health and irrigation water demands.

However, the occurrence and impacts of flash droughts in the current and future climate in India are not well known.

The study, published in the journal 'npj Climate and Atmospheric Science', examined the role of human-caused climate warming and intra-seasonal variability during the summer monsoon season on the flash drought occurrence over India.

The researchers used soil moisture simulations, observations from India Meteorological Department (IMD), and climate projections to examine the frequency of flash droughts in the country under the observed and future climate scenarios.

The team noted that the worst flash drought in the observed timeframe from 1951–2016 occurred in 1979, when more than 40 per cent of the country was affected.

The frequency of concurrent hot and dry extremes, the researchers explained, is projected to rise by about five-fold, causing approximately seven-fold increase in flash droughts like 1979 by the end of the 21st century.

"We find that flash droughts in India are caused by the monsoon breaks or delayed monsoon and the number of flash droughts will increase in the future," said Vimal Mishra, Associate Professor of Civil Engineering at IIT Gandhinagar.

"As air temperature is projected to get warmer significantly in the future due to climate change, monsoon breaks and increased air temperature can exacerbate the flash drought occurrence in India,” Mishra, the corresponding author of the study, said.

The researchers -- including Saran Aadhar and Shanti Shwarup Mahto -- both from IIT Gandhinagar, noted that India is projected to witness extreme climatic conditions in the future.

Mishra explained that flash droughts can be devastating for agriculture in the absence of irrigation, adding, however, their prediction ahead of time can assist in minimising losses and managing water resources.

"Climate warming is directly linked with the occurrence of heat waves, droughts, extreme precipitation and floods, which have implications for society," Mishra added. PTI