At least 17 of those fires are burning in California, 10 in Idaho and five in Colorado 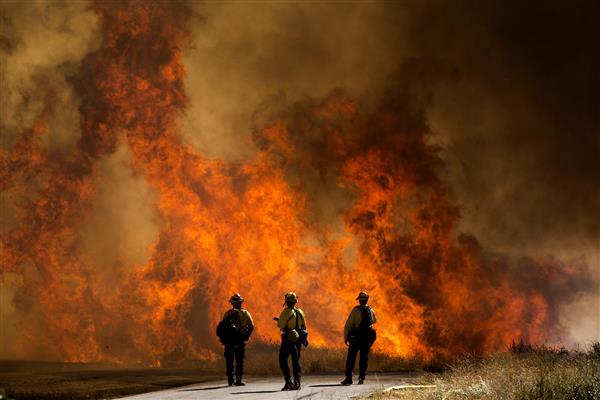 The fire has destroyed at least 26 private residences near the town of Jamestown. — AP/PTI

Experts have warned that two wildfires currently raging in the US state of Colorado could merge resulting in one massive blaze.

As firefighters continued to battle the East Troublesome Fire, which erupted on October 14 and has scorched over 170,000 acres since, authorities on Thursday closed the Rocky Mountain National Park, while mandatory evacuations were issued for parts of Estes Park, CNN reported.

As of Thursday night, the blaze, located near Grimes Peak in the Arapaho National Forest, was only 5 per cent contained.

According to the experts, the East Troublesome Fire could now merge with the Cameron Peak Fire, Colorado's largest wildfire on record, which is about 55 per cent contained.

Meanwhile, other wildfires currently raging in the state includes the Calwood Fire, which has increased to more than 9,900 acres and was 24 per cent contained.

The fire has destroyed at least 26 private residences near the town of Jamestown.

There are currently 61 wildfires raging across the country that have scorched nearly 4 million acres, CNN quoted the National Interagency Fire Center as saying.

At least 17 of those fires are burning in California, 10 in Idaho and five in Colorado.

Other states that have large active blazes include Arizona, Montana, Oregon, Washington state and Wyoming. IANS