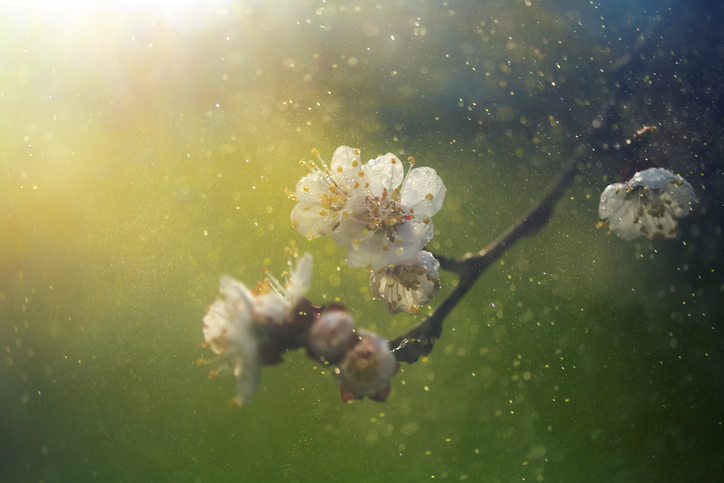 Air pollutants influence pollen concentration and different types of pollens have a unique response to weather conditions, shows a study by Indian scientists.

Pollens remain suspended in the air and form part of the air we breathe. When inhaled, they put a strain on our upper respiratory system, and cause widespread upper respiratory tract and naso-bronchial allergy with manifestations like asthma, seasonal rhinitis, and bronchial irritation.

Airborne pollen varies in character from place to place due to diverse meteorological or environmental conditions. There is growing evidence that airborne pollen plays a crucial role in increasing allergic diseases in the urban environment. As pollen, climatic variables, and air pollutants coexist in nature, they have the potential to interact with one another and exacerbate their adverse effects on human health.

In light of this, Prof Ravindra Khaiwal from Post Graduate Institute of Medical Education and Research (PGIMER), Chandigarh, along with Chairperson, Department of Environment Studies, Dr Suman Mor and PhD scholar Akshi Goyal, studied the influence of meteorology and air pollutants on the airborne pollen of Chandigarh.

In the study, financially supported by the Department of Science and Technology, and one of the first in India trying to understand the impact of air pollutants and meteorological variables on airborne pollen, they explored the relationships of temperature, rainfall, relative humidity, wind speed, direction, and ambient air pollutants mainly, particulate matter and nitrogen oxide to the airborne pollen, a release said.

The study, recently published in Science of the Total Environment, suggests that each pollen type studied had a unique response to weather conditions and air pollutants.

The majority of pollen types were reported in the spring and autumn flowering period. Distinct peaks of airborne pollen were observed during favourable weather conditions, like moderate temperature, low humidity, and low precipitation. It was observed that moderate temperature plays a significant role in flowering, inflorescence, maturation, pollen release, and dispersal. In contrast, pollen grains were eliminated from the atmosphere during precipitation and high relative humidity.

A complex and obscure relationship of airborne pollen was indicated with air pollutants. The scientists plan to examine long-term data sets to establish the trends in the relationship.

Khaiwal highlighted that in terms of the climatic future, it is expected that the urban environment will significantly impact plant biological and phenollogical parameters.

“Therefore, the study’s findings generate useful hypotheses that air pollutants influence pollen concentration and can be further explored as the data set expands in the future,” the release added.

The current study’s findings could help to improve the understanding of complex interactions between airborne pollen, air pollutants, and climatic variables to aid in formulating suitable mitigation policies and minimising the burden of pollinosis in the Indo-Gangetic Plain region - identified as a hotspot of air pollution, specifically during October and November. —IANS