In some faiths and cultures, human tails are considered holy and are worshiped 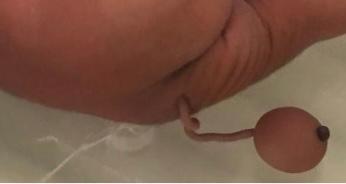 A baby boy was born in Brazil with a 12 cm-long appendage that had a ball on the end, with scientists calling it "true human tail".

The doctors were able to successfully remove the "chain and ball" after surgery. The baby was born at the Albert Sabin Children's Hospital in the city of Fortaleza.

He was born prematurely at 35 weeks with no complications, but initial assessment of the child revealed the tail and ball growth on the end.

After an ultrasound scan revealed no concerns relating to the tail being attached to the baby's nervous system, surgeons opted to remove the appendage but they did not detail how they did so.

The surgery, as detailed in the Journal of Pediatric Surgery Case Reports had no complications but no details of the boy's recovery was given.

A true human tail is remnant of the one most babies grow in the womb, before it is reabsorbed into the body, forming the tailbone.

In contrast a pseudo-tail is a protrusion from the bottom of the spinal cord which is characterised by being made out of fat, cartilage and elements of bone, the doctors explained.

In some faiths and cultures, human tails are considered holy and are worshiped.