NASA is set to become the first global space agency to fly a drone in the atmosphere of another planet. 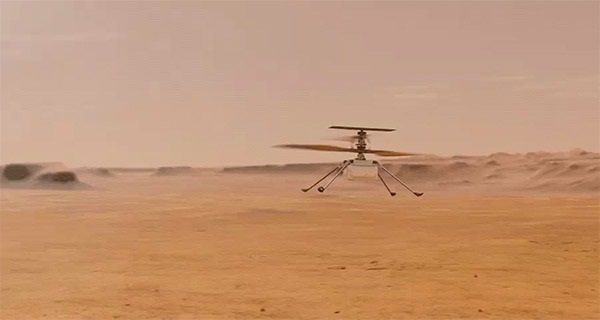 With the successful landing of its Perseverance Mars rover on Friday, NASA is set to become the first global space agency to fly a drone in the atmosphere of another planet, an advance which could pave the way for future "tandem-exploration" missions that include new terrestrial and aerial surveillance methods.

As the rover surveys and looks for evidence of past life around the Jezero crater on Mars -- an ancient lakebed believed to have once contained liquid water -- the Ingenuity helicopter's expected flight on Mars 31 days from now will be a test demonstrator, the space agency had said.

The 1.8 kilogramme chopper is about 0.49 metre tall with two rotor blades of about 1.2 metre wingspan stacked above each other.

"Even though Ingenuity is a tech demo, meaning we are trying to demonstrate a new technology and not necessarily doing any science data gathering, the inspiration came from future science and operational consideration," Goutam Chattopadhyay, Senior Research Scientist at NASA's Jet Propulsion Laboratory (JPL) in California, said.

Over the course of its mission, Ingenuity is expected to make five attempted flights each lasting for about 90 seconds at a stretch.

While NASA already conducts several reconnaissance missions to pick exploration sites on other planets before sending rovers to them, Chattopadhyay said these terrestrial vehicles do not have the ability to go on their own, expecting to find "something interesting".

He believes this is where drones may come into the picture in future planetary exploration missions.

"Now, if we have a helicopter or such a flying vehicle that can go around, do some surveillance, send that data back to the rover, and then the rover makes a decision whether to further explore some areas based on that data, it will be much more interesting," the NASA scientist explained.

However, NASA Engineers, including J (Bob) Balaram from JPL, say there are several new challenges to flying a fully autonomous drone on the Martian atmosphere which are not encountered here on the Earth.

Balaram and his colleagues explain these challenges in a study describing the design, development, and testing of the Mars helicopter, posted in the Aerospace Research Central website.

The research, presented at the American Institute of Aeronautics and Astronautics SciTech 2019 Forum, noted that the Red Planet's thin carbon dioxide atmosphere is approximately 1 per cent of the Earth's atmosphere density -- equivalent to the Earth's air density at an altitude of 35 km.

"Since this is a very thin atmosphere, we can't really fly anything very high up on Mars," Indian astrophysicist Dibyendu Nandi added.

He explained that airplanes and helicopters fly on the principle of lift based on Newton's third law of motion: For the lift force to push the helicopter up, an equal force should be applied which pushes the air down.

"If the density of the atmosphere becomes half, the lift becomes halved. So if a planet has a weak atmosphere, getting the lifting force is always going to be a problem, The drones need to be able to move greater amounts of air than they do on Earth," Nandi, a scientist at the Indian Institutes of Science Education and Research (IISER) Kolkata, said.

While the weaker gravitational pull of Mars -- 38 per cent that of the Earth -- is an advantage, he said choppers meant for Mars still need to weigh very less with blades that can rotate much faster while consuming as little energy as possible.

"For example, a helicopter rotor on Earth rotates at 400-600 rotations per minute. Whereas on Mars, the blades need to rotate at 2600 rpm. This is a huge challenge," Chattopadhyay added.

To test the drone's performance in Martian conditions, NASA scientists evacuated a chamber to near vacuum and back-filled it with carbon dioxide gas to a density representative of the Red Planet's atmosphere.

According to the NASA engineers, the helicopter also had to be vacuum compatible and capable of survival at very low temperatures down to minus 100 degrees Celsius.

"So the materials used for building vehicles for Mars undergo expansion and contraction between day and night and may lead to severe physical stress on the structure of these vehicles," Nandi added.

At the JPL Space Simulator, the engineers also tested the helicopter's aerial performance under a range of conditions, including its response to winds and higher-speed forward flight by placing it in front of an array of small fans capable of producing winds up to approximately 10 metres per second.

And drones built for such missions also have to be fully autonomous.

"We cannot really do live driving the vehicle sitting in here due to the time delay related to the huge distance. The helicopter flies autonomously using a gyroscope, accelerometer, camera, altimeter, and on-board computer," Chattopadhyay explained.

He said the autonomous system developed for Ingenuity uses cutting-edge artificial intelligence and machine learning tools, which he said can help engineer better light-weight and efficient drones here on the Earth for delivering medicines, transporting organs for transplant, and other uses.

Just like the Sojourner rover on the 1997 Pathfinder mission paved the way for numerous Mars rovers, the scientists believe the Ingenuity technology demo can open the doors for future drone missions to other planets. PTI