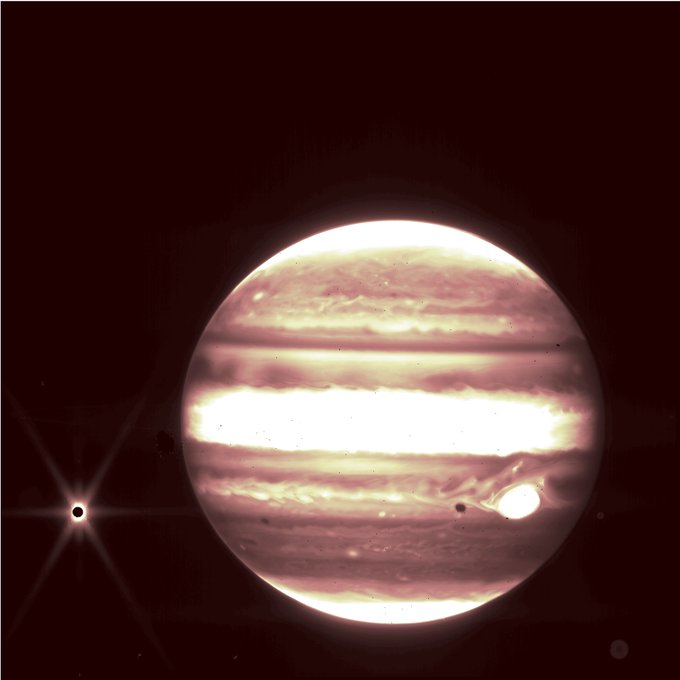 After releasing stunning coloured images of thousands of galaxies in our universe, NASA has now unveiled outstanding images of Jupiter and spectra of several asteroids taken by the James Webb Space Telescope.

The data demonstrates Webb's ability to track solar system targets and produce images and spectra with unprecedented detail, the US space agency said in a statement.

New images show distinct bands that encircle Jupiter as well as the Great Red Spot, a storm big enough to swallow the Earth.

"Combined with the deep field images released the other day, these images of Jupiter demonstrate the full grasp of what Webb can observe, from the faintest, most distant observable galaxies to planets in our own cosmic backyard that you can see with the naked eye from your actual backyard," said Bryan Holler, a scientist at the Space Telescope Science Institute in Baltimore.

In one of the images, Jupiter's moon Europa with a probable ocean below its thick icy crust is seen which is the target of NASA's forthcoming Europa Clipper mission.

"What's more, Europa's shadow can be seen to the left of the Great Red Spot. Other visible moons in these images include Thebe and Metis," the space agency said.

Scientists were especially eager to see these images because they are proof that Webb can observe the satellites and rings near bright solar system objects such as Jupiter, Saturn, and Mars.

Scientists will use Webb to explore the question of whether we can see plumes of material spewing out of moons like Europa and Saturn's moon Enceladus.

Additionally, Webb easily captured some of Jupiter's rings. That the rings showed up in one of Webb's first solar system images is "absolutely astonishing and amazing".

Webb was designed with the requirement to track objects that move as fast as Mars, which has a maximum speed of 30 milliarcseconds per second.