Scientists decode how Mars lost its water and continues to lose 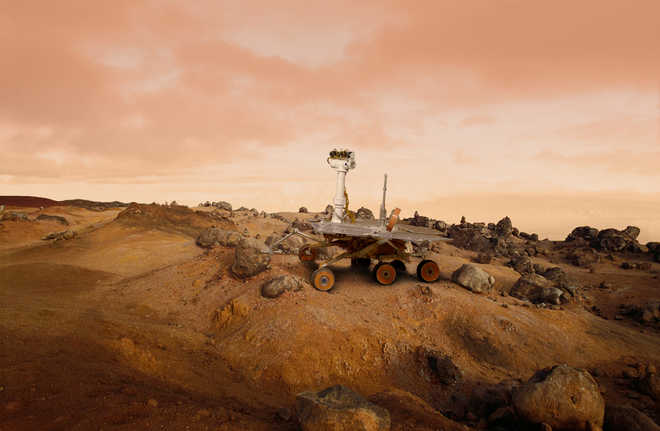 Mars continues to lose water today as vapour is transported to high altitudes after sublimating from the frozen polar caps during warmer seasons, the team wrote in the journal Science.

Scientists have further decoded the phenomenon that led Mars to lose the equivalent of a global ocean of water up to hundreds of feet deep over billions of years.

Scientists using an instrument aboard NASA’s Mars Atmosphere and Volatile Evolution (MAVEN) spacecraft have discovered that water vapour near the surface of the Red Planet is lofted higher into the atmosphere than anyone expected was possible.

There, it is easily destroyed by electrically charged gas particles— or ions — and lost to space.

Mars continues to lose water today as vapour is transported to high altitudes after sublimating from the frozen polar caps during warmer seasons, the team wrote in the journal Science.

“We were all surprised to find water so high in the atmosphere,” said Shane W Stone, a doctoral student in planetary science at the University of Arizona’s Lunar and Planetary Laboratory in Tucson.

“The measurements we used could have only come from MAVEN as it soars through the atmosphere of Mars, high above the planet’s surface.” To make their discovery, Stone and his team tracked the abundance of water ions high over Mars for more than two Martian years.

In doing so, they determined that the amount of water vapour near the top of the atmosphere at about 150 km, above the surface is highest during summer in the southern hemisphere.

During this time, the planet is closest to the Sun, and thus warmer, and dust storms are more likely to happen.

The warm summer temperatures and strong winds associated with dust storms help water vapour reach the uppermost parts of the atmosphere, where it can easily be broken into its constituent oxygen and hydrogen.

The hydrogen and oxygen then escape to space. Previously, scientists thought that water vapour was trapped close to the Martian surface like it is on Earth.

“Everything that makes it up to the higher part of the atmosphere is destroyed, on Mars or on Earth,” Stone said, “because this is the part of the atmosphere that is exposed to the full force of the Sun.” The researchers measured 20 times more water than usual over two days in June 2018, when a severe global dust storm enveloped Mars (the one that put NASA’s Opportunity rover out of commission).

Stone and his colleagues estimated Mars lost as much water in 45 days during this storm as it typically does throughout an entire Martian year, which lasts two Earth years.

“We have shown that dust storms interrupt the water cycle on Mars and push water molecules higher in the atmosphere, where chemical reactions can release their hydrogen atoms, which are then lost to space,” said Paul Mahaffy, director of the Solar System Exploration Division at NASA Goddard and principal investigator of NGIMS.

Other scientists have also found that Martian dust storms can lift water vapour far above the surface.

But nobody realised until now that the water would make it all the way to the top of the atmosphere.

“What’s unique about this discovery is that it provides us with a new pathway that we didn’t think existed for water to escape the Martian environment,” said Mehdi Benna, a Goddard planetary scientist and co-investigator of MAVEN’s NGIMS instrument.

“It will fundamentally change our estimates of how fast water is escaping today and how fast it escaped in the past.” — IANS