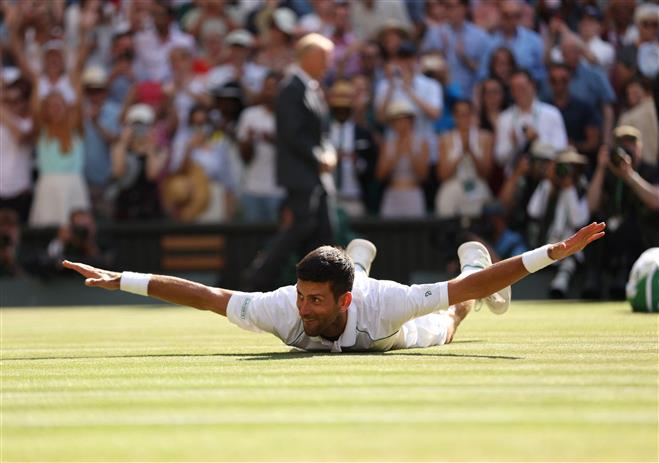 Novak Djokovic waited. He waited for Nick Kyrgios to lose focus and lose his way. Waited to find the proper read on his foe’s big serves. Waited until his own level rose to the occasion.

Djokovic is not bothered by a deficit — in a game, a set, a match. He does not mind problem-solving. And at Wimbledon, for quite some time now, he does not get defeated.

I lost words for what this trophy means. It has always been and always will be the most special tournament. Realising a childhood dream in winning this trophy. Every year it gets more meaningful, I am really blessed. The most special court in the world. I am extremely happy and grateful to be here Novak Djokovic

Yeah he is a bit of a god, I’m not going to lie. I thought I played well. First of all congratulations to Novak and your team, you’ve won this Championships that many times I don’t even know any more Nick Kyrgios

The top-seeded Djokovic ran his unbeaten run at the grasscourt Grand Slam tournament to 28 matches and raised his career haul to 21 Major trophies, breaking a tie with Roger Federer and moving just one behind Rafael Nadal’s 22 for the most in the history of men’s tennis.

Among men, only Federer, with eight, has won more titles at Wimbledon than Djokovic. In the professional era, only Federer was older (by less than a year) than the 35-year-old Djokovic when winning at the All England Club.

There were two particularly key moments today that went Djokovic’s way, ones that Kyrgios would not let go as he began engaging in running monologues, shouting at himself or his entourage (which does not include a full-time coach), finding reason to disagree with the chair umpire (and earning a warning for cursing) and chucking a water bottle.

In the second set, with Djokovic serving at 5-3, Kyrgios got to 0-40 — a trio of break points. But Kyrgios played a couple of casual returns, and Djokovic eventually held. And then, in the third set, with Kyrgios serving at 4-4, 40-0, he again let a seemingly sealed game get away, with Djokovic breaking there.

The 40th-ranked Kyrgios was trying to become the first unseeded men’s champion at Wimbledon since Goran Ivanisevic in 2001. Ivanisevic is now Djokovic’s coach and was in the Centre Court guest box for the match.

Kyrgios is a 27-year-old from Australia who never had been past the quarterfinals in 29 previous Grand Slam appearances — and last made it even that far seven-and-a-half years ago.

In some ways, he stole the show today. He tried shots between his legs. Hit some with his back to the net. Pounded serves at up to 136 mph and produced 30 aces. Used an underarm serve, then faked one later. But in the end, if he had the tricks, Djokovic, calm and steady, had substance.

After the win, Djokovic, who hasn’t had a great relationship with Kyrgios, was full of praise for the Aussie. “Congrats to you and your team. I wish you all the best, man. I really think you are an amazing talent,” Djokovic said, adding: “I never thought I’m going to say so many nice things about you, considering the relationship! OK, it’s officially a bromance! Hopefully this is the start of a wonderful friendship. Let’s start with dinner and drinks and we will see.” — AP/PTI

21 Djokovic won his 21st Major title. He broke a tie with Roger Federer and moved just one behind Rafael Nadal’s 22 for the most in the history of men’s tennis.

7 Among men, only Federer (8 titles) has won more titles at Wimbledon than Djokovic.

4 It was Djokovic’s fourth consecutive title at the All England Club.

28 He extended his unbeaten run at the grass-court Grand Slam tournament to 28 matches.

35 In the professional era, only Federer was older (by less than a year) than the 35-year-old Djokovic when winning at the All England Club.