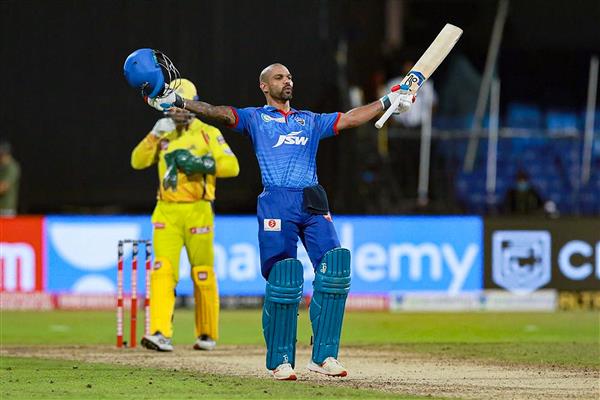 Left-handed Shikhar Dhawan on Saturday became the seventh Delhi Capitals player to earn a man of the match award in the team’s seventh victory, indicating that the table-toppers have not depended on performances of just one player in the ongoing edition of the Indian Premier League (IPL).

The left-handed opening batsman cracked a 58-ball unbeaten 101 to lead the team to a successful chase of 180 during their game against Chennai Super Kings.

In the previous game against Rajasthan Royals (RR), Anrich Nortje produced a sizzling spell in which he bowled three of the fastest deliveries in IPL history to spread fear in the RR line-up for which he won the Man of the Match award.

Nortje had spoken about the team’s collective performance after the previous man of the match performance, saying: “We know when to step it up and know when to relax. It’s a good balance that the team has at the moment.”

Delhi Capitals are at the top of the points table with 14 points in nine matches. Their two losses have come against SunRisers Hyderabad and Mumbai Indians. The Shreyas Iyer-led side will next play against Kings XI Punjab on Tuesday. IANS