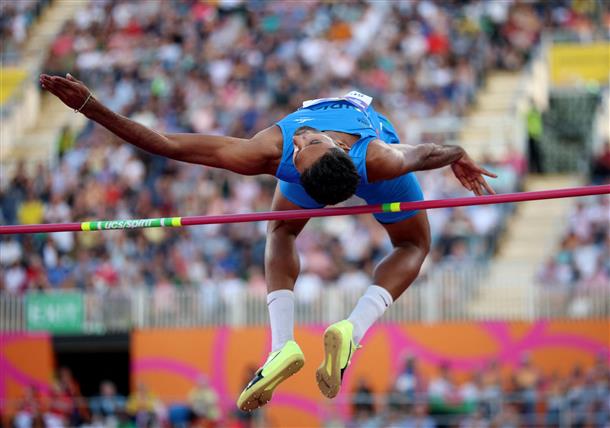 For Tejaswin Shankar things couldn’t have panned out any better. For someone who had to knock on the doors of the Delhi High Court for his place in the Indian athletics team, the high jumper won the biggest prize in his flourishing career. A bronze medal in high jump made him the first Indian to win a medal at the Commonwealth Games in the discipline.

Now that he has won his first senior international medal, the Delhi athlete wants to use it as a springboard for future successes. The biggest takeaway for Shankar was seeing his name being discussed alongside reigning Olympics champion Neeraj Chopra

“Last night someone said my medal puts me on par with Neeraj Chopra and I can inspire others,” Shankar said. “It was ridiculous really and my reply was ‘I am nowhere near his stature’. The only thing is that with this medal I can be in the same picture frame with him. He is a legend and we all look up to him and want to stay humble like him,” he added.

The 23-year-old explained his predicament with the Athletics Federation of India’s (AFI) selection policy. The AFI had excluded him from the CWG team on the basis of his continued absence from the national meets. Being a student of the Kansas State University in the USA, Shankar was bound by the rules to compete in the collegiate athletics circuit. It forced him to miss out on national meets, which was made mandatory by the AFI.

“I have always been an advocate that the policy should be the same for everyone. If it is applied selectively then I guess we have to find another alternative like we did this time,” Shankar said. “My biggest problem was that I was competing in the collegiate circuit as I was a student there. You just cannot take days off just like that to take part in the Nationals. Now I don’t see any problem as my studies are over and hopefully we can all put things behind us and move on,” he added.

Shankar wants to improve on his national record of 2.29 metres, which was set in 2018. He also announced that he has plans to compete in decathlon at the Asian Games next year. “I will definitely compete in decathlon at the Asian Games as it helps me in high jump. I have this tendinitis issue, and I usually need a lot of jumps to get better. But ever since I started training for the decathlon, like doing hurdles and long jump, I think it has made me better in high jump,” he said.

“The 2.30m height has become a barrier for me. It is one of my goals going forward. But right now I want to go back home and cherish this medal with my family as it has been a rollercoaster one and a half months for us,” he added.