The Argentina great had a penalty saved but his team still beat Poland 2-0 Wednesday after second-half goals from Alexis Mac Allister and Julian Alvarez and advanced to the last-16 stage.

After opening the World Cup with a shocking 1-2 loss to Saudi Arabia in one of the biggest upsets in the tournament’s history, the Albiceleste wound up finishing in the first place in Group C and will next play Australia — a surprise qualifier for the knockout stage.

Messi rolls into Saturday’s game suddenly in a strong position in likely his final World Cup.

“Now another World Cup begins.” Messi said, “and hopefully we can continue to do what we did today.”

As for Poland, it was ultimately a happy night, too, because the team went through as the group’s second-place team — on goal difference ahead of Mexico — and will next play defending champions France.

Messi ended up relieved after failing to score a penalty for the second straight World Cup. It was awarded after he was hit in the face by the flailing hand of Poland goalkeeper Wojciech Szczesny, who made amends by diving to his left to block Messi’s kick in the 39th minute.

“I’m upset that I missed the penalty, but the team came back stronger after my error,” he said.

A largely pro-Argentina crowd, waving flags and scarfs and beating drums behind both goals, had been sweeping Messi and his team along at the 44,000-seat Stadium 974 and they didn’t stop after the penalty. Within seconds, a chant of “MESSI! MESSI!” immediately reverberated around the venue in a bid to keep their idol’s head high.

And the roars were even louder at the start of the second half, first after Mac Allister’s goal — a scruffy finish from Nahuel Molina’s cut-back from the right — in the first minute and soon after as news filtered through that Mexico had taken the lead against Saudi Arabia, who started the day in the third place. — AP

Doha: Argentina coach Lionel Scaloni (in pic) said it was “madness” for his team to play their World Cup last-16 stage game against Australia with just two rest days after their last group match. “I think it’s absolute madness to play in nearly two days and a bit when we are top of the group. I can’t understand it,” Scaloni said, talking to the media after the game at Doha’s 974 Stadium ended just before midnight. “What time is it? Nearly one o’clock in the morning ... Thursday, the next day is for preparation and then we play. Those aren’t good conditions but it’s the same for everyone. We’re first in the group. We could have had more rest.” Reuters 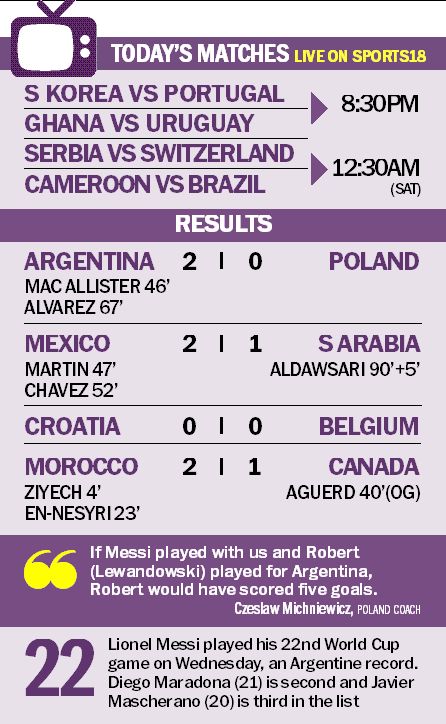 Ronaldo is 50-50 to play against S Korea

Portugal coach Fernando Santos said that Cristiano Ronaldo’s availability is still in question for their closing Group H match against South Korea. The 37-year-old Portugal captain missed Wednesday’s practice and stayed at the gym to do recovery and specific exercises and, with his team already through to the knockout stages, he could be rested even if fit.

Uruguay’s Luis Suarez refused to apologise to Ghanaians for his role 12 years ago in their biggest World Cup setback, arguing it wasn’t his handball that denied Ghana a quarterfinal winner but their missed penalty that followed. A win for Ghana against Uruguay in Friday’s final Group H match could avenge their acrimonious defeat by the South Americans in 2010, when Suarez used his hand to block an extra-time winner for Ghana, who missed the resulting spot-kick and lost the penalty shootout that followed. A reporter asked Suarez if he would say sorry to a nation that considered him “El Diablo”, or “the devil himself”. “I don’t apologise about that ... but the player is gonna miss a penalty,” he said.

US attacker Christian Pulisic said he was recovering from an injury sustained scoring a crucial goal against Iran and aspired to be fit enough to face the Netherlands in Saturday’s last-16 clash. “I’m taking it day-by-day for now and I will do everything in my power to work with this medical team and make sure I can play,” Pulisic said, adding that his pelvic contusion was painful but improving.

Brazil coach Tite sent a message of support to Pele from the World Cup. Pele was hospitalised on Tuesday in Sao Paulo to regulate the medication in his fight against a colon tumor, his daughter Kely Nascimento said. She added that there was “no emergency” concerning her 82-year-old father’s health. “We all want to wish good health to Pele,” Tite said in Qatar a day before Brazil’s next match against Cameroon.

France’s players have generally been happy at the World Cup in Qatar although one, Ousmane Dembele, has found it hard to adjust to one feature on the streets of Doha — stray cats. “Ousmane is scared of cats. There are cats strolling around and he’s scared of them. It makes everyone laugh,” his teammate Randal Kolo Muani said. Agencies