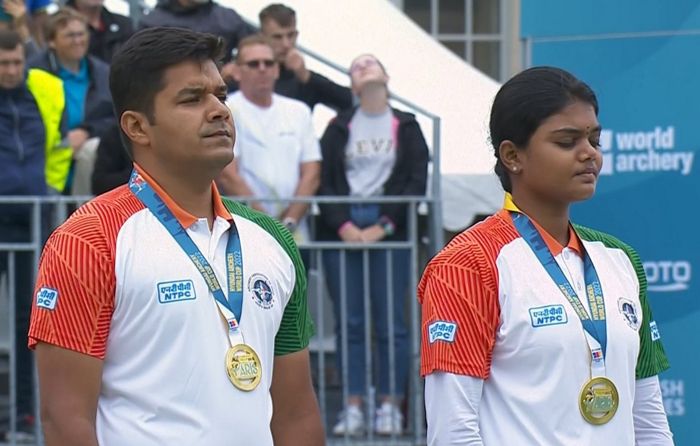 Abhishek Verma and Jyothi Surekha Vennam won 152-149 in the final.

Riding on a spectacular start, the Indians fought off a late fight-back from France’s Jean Boulch and 48-year-old Olympics medallist Sophie Dodemont to seal the contest 152-149 at the Stage 3 edition here today.

Later, world No. 3 Jyothi secured a second medal for India after settling for a silver in the individual section. She went down 148-148 (10-10*) to Ella Gibson in an intense shoot-off that was decided on the arrow that landed closer to the centre.

Earlier in the day, the third-seeded pair of Verma and Jyothi got off to a flier, drilling in four 10s that included two Xs to race to a three-point lead and put early pressure on the experienced French pair.

The Indians managed just one 10 in the second end as the French duo reduced the deficit to one point. The third was a tie. In the deciding fourth end, Verman and Jyothi held their nerves to edge out their opponents.

Verman and Jyothi have a handful of World Cup bronze medals and their best was a World Cup Final silver last year.

In the individual event, the 22-year-old Gibson displayed some exceptional shooting and gained a one-point lead over Jyothi in the third end. Both the archers were neck-and-neck at 60 each following two perfect rounds.

Jyothi bounced back to level the scores at 148-148 in the fifth end and force a shoot-off. Both the archers shot a 10 each but Gibson’s arrow was closer to the centre to confirm her second World Cup gold.

The women’s recurve team of Deepika Kumari, Ankita Bhakat and Simranjeet Kaur will take on Chinese Taipei for the gold tomorrow.