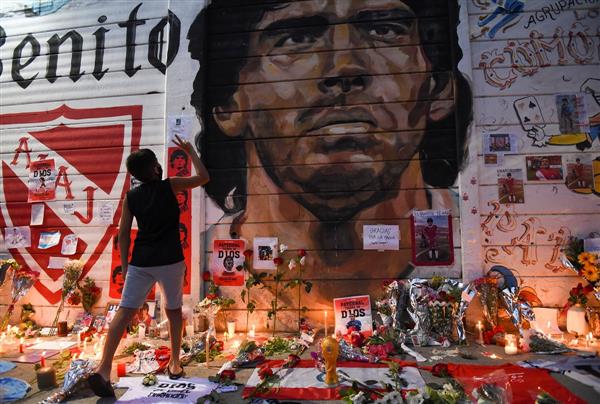 The Argentina government has declared three days of national mourning for the death of football legend Diego Armando Maradona, the office of the Presidency has said.

“The President of the Nation will decree three days of national mourning from the day (of his death),” according to the statement on Wednesday evening, reports Xinhua news agency.

Maradona died due to cardiorespiratory arrest at his home in the Tigre district on the northern outskirts of the capital Buenos Aires.

His body did not show “any sign of violence” and everything indicates that he died of “natural causes,” the prosecutor general of the Argentinian town of San Isidro, John Broyad, said.

According to Broyad, Maradona passed away “around 12:00” local time (1500 GMT) Wednesday at his home in the neighbourhood of San Andres, on the northern outskirts of the capital.

In statements to the press, Broyad said: “At 16:00 (local time) the work of the Forensics Police began on the body of the former footballer.” “No signs of criminality were evident, no signs of violence,” said the prosecutor.

In addition, he reported that an autopsy would be carried out at the morgue of San Fernando Hospital, to “reliably determine the causes of death”.

On October 30, Maradona had celebrated his 60th birthday. IANS