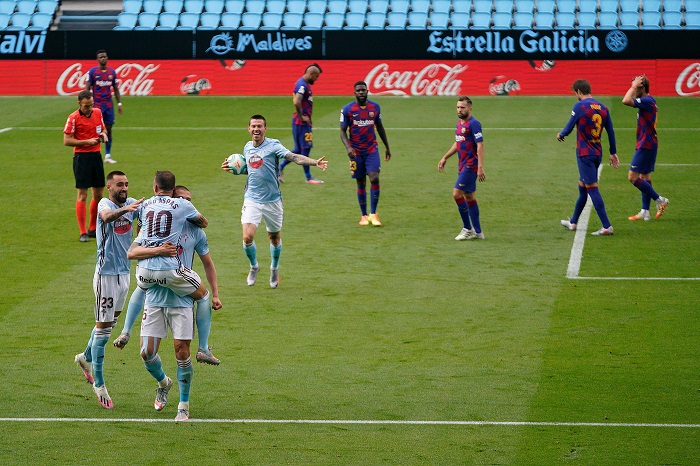 Celta Vigo's players celebrate after scoring a goal against Barcelona in Vigo. AFP

Spain striker Iago Aspas dealt a fresh blow to Barcelona's La Liga title hopes by striking a late free-kick to snatch a 2-2 draw at home to the Catalans on Saturday as Quique Setien's side twice threw away the lead in a thrilling match.

The draw put Barca back on top of the table on 69 points after 32 games but Real Madrid, on 68, can go two points clear at the summit if they beat Espanyol away from home on Sunday.

Luis Suarez headed Barca in front in the 20th minute thanks to a piece of ingenuity from Lionel Messi, who looked certain to fire at goal from a free kick but instead lofted the ball towards his Uruguayan strike partner.

Russia striker Fedor Smolov equalised for Celta early in the second half, knocking in a pass from Okay Yokuslu to complete a quick counterattack after Barca's Ivan Rakitic had given the ball away.

But Suarez restored Barca's lead in the 67th minute after combining again with Messi, swivelling to fire into the bottom corner.

The second goal looked to have averted a second consecutive away draw for Barca after last week's goalless stalemate at Sevilla but Aspas won a late free kick after falling over the outstretched legs of Gerard Pique.

Celta's talismanic striker made the late opportunity count by sending a low drive around the wall and into the near bottom corner, flummoxing Barca goalkeeper Marc-Andre ter Stegen.

Celta should have won the game in added time when Nolito arrived at the far post with the goal gaping, but instead of tapping into the net his shot went straight at Ter Stegen.

Celta are 16th on 34 points, the draw taking them eight points clear of the relegation zone.

Madrid: Forward Marcos Llorente came off the bench and inspired Atletico Madrid to a 2-1 win over Alaves in La Liga on Saturday as Diego Simeone's side maintained their superb run of form since the season resumed following the three-month coronavirus stoppage.

Saul Niguez headed in the opening goal in the 59th minute while Diego Costa netted with a penalty in the 73rd, although visiting forward Joselu scored a penalty in added time to make for an uncomfortable end to the game for Atletico.

The penalty was awarded for a handball by Atletico captain Koke, who will miss next week's trip to Barcelona through suspension after earning a booking for the incident.

Atletico had struggled to break down Alaves and had been limited to long distance efforts until Llorente came on in the second half and immediately caused havoc down the right flank, winning the free kick from which his side found a breakthrough.

Saul latched on to Kieran Trippier's free kick to head home before Llorente ripped another hole in the visiting side's defence by winning the penalty from which Costa sent Fernando Pacheco the wrong way to double Atleti's lead.

Atletico are third in the standings on 58 points after 32 games. The win extended their advantage over fourth-placed Sevilla by four points and increased their gap with fifth-placed Getafe by nine.

Alaves, who slumped to a third straight defeat, are 15th on 35 points, nine above the relegation zone.

"It was a really hard-fought game, Alaves sat very deep and it was very hard for us to get near their goal or down the wing but we got the breakthrough from a set play then they opened up and our subs caused them damage," said goalscorer Saul.

"I can sleep easily because the team is in very good form, we all worked hard in our homes during lockdown and after it and that has made the difference between us and our rivals."

The match was also a landmark win for coach Simeone, who became the club's most successful manager with 195 La Liga victories, overtaking the late Luis Aragones who previously held the record with 194 wins in the top-flight. — Reuters