24-year-old Sabalenka manages to get her head straight after going down an early break to blast Swiss Belinda Bencic off the court 7-5, 6-2 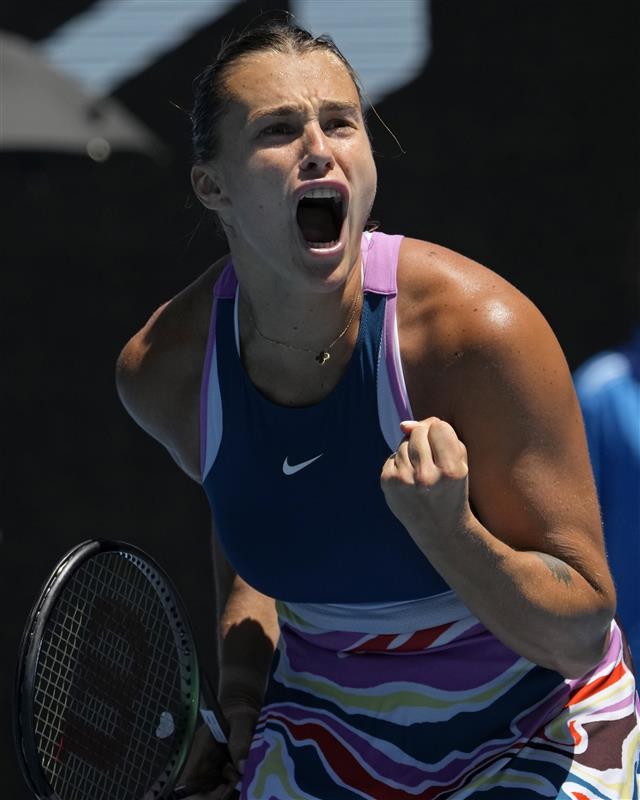 Aryna Sabalenka of Belarus celebrates after defeating Belinda Bencic of Switzerland in their fourth round match at the Australian Open tennis championship in Melbourne, Australia, on January 23, 2023. AP/PTI

Aryna Sabalenka eased into quarter-finals for the first time to firm as a favourite for the Australian Open title on Monday, but fourth seed Caroline Garcia was bundled out and 17-year-old  Linda Fruhvirtova’s dream run was brought to an end.

World number 45 Magda Linette ensured Poland would be represented in the last eight by stunning Garcia 7-6(3) 6-4, while Croatian Donna Vekic, ranked 64th in the world, held her nerve to down Fruhvirtova 6-2 1-6 6-3.

Vekic will next play Sabalenka and 30-year-old Linette will take on Czech former world number one Karolina Pliskova, who breezed past China’s Zhang Shuai 6-0 6-4 on Kia Arena.

Garcia, 29, looked set to continue the late-career renaissance that saw her reach the semi-finals of the US Open and win the WTA Finals last year when she took a 3-0 lead in the first set against Linette.

It all went downhill from there, though, as Linette played inspired tennis to fight her way back into the set and won it on the tiebreak.

The second set was more of the same as Linette kept up her level and Garcia’s unforced error count racked up, the normally placid Frenchwoman showing her frustration with a stream of expletives that earned her a code violation.

“I don’t know what happened. I’m speechless really, I don’t know what to say,” said a breathless Linette after Garcia had sent one final forehand long to hand her a place in her first Grand Slam quarter-final.

With Linette’s younger compatriot and hot favourite Iga Swiatek having departed in the fourth round on Sunday, Garcia’s exit leaves Sabalenka and American Jessica Pegula as the only top 10 seeds in the quarter-finals.

Sabalenka looks to have as good a chance as anyone of winning the Daphne Akhurst Trophy if she can conquer the demons that sometimes take hold when her power game is not working as well as she would like.

On Monday, the 24-year-old Belarusian managed to get her head straight after going down an early break to blast Swiss Belinda Bencic off the court 7-5 6-2.

“Definitely today I felt like I couldn’t handle her power,” said Bencic.

“I think that was the biggest difference. But still, you know, I don’t feel like this is a really bad loss. Like, she’s for sure very in-form right now.”

Having apparently fixed what was once the most inconsistent serve at the top of the women’s game, Sabalenka has started the season with eight straight wins and has yet to lose a set.

Vekic also looked to be coasting to a straightforward win over Fruhvirtova after wrapping up the opening set with an ace but the Czech has been confounding her olders and betters throughout her fairytale campaign.

The teenager showed maturity beyond her years in key moments in the second set and played almost flawless tennis to even up the contest, sending Vekic scurrying for a bathroom break to regather herself.

It worked, and although Fruhvirtova continued to challenge her serve, the 26-year-old fended her off to secure a spot in the Melbourne Park quarter-finals for the first time in 11 attempts.

“It feels pretty good, I would say,” said an emotional Vekic.

“I didn’t really really feel that I had much control in the second set but I knew that I had to keep fighting, hoping and believing that I would win.” Nine-times men’s champion Novak Djokovic and his injured hamstring will be in the spotlight when he takes on Australian Alex de Minaur in the night session at the Rod Laver Arena. Reuters