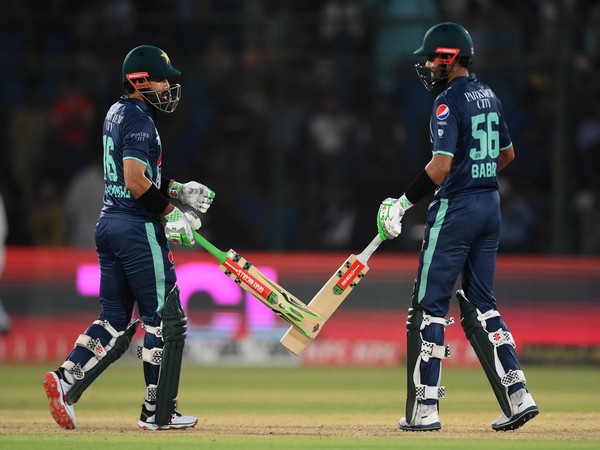 An absolute masterclass of an innings from Babar Azam helped Pakistan thrash England by 10 wickets in the second T20I of the seven-match marathon series on Thursday.

The opening pair of Babar and Mohammad Rizwan came out all guns blazing to secure a record opening partnership of 203 runs in reply to the massive 199/5 first-innings total of England.

With this win, Pakistan levelled and secured the first win of the T20 series. England reached a daunting total of 199/5, with the help of captain Moeen Ali's blazing (55*) and a quick-fire (43) from Ben Duckett. Pakistan’s Haris Rauf took two wickets for the hosts and ended with figures of (2/30) from his quota of allotted overs.

Chasing 200, Babar (110*) and Rizwan (88*) went ballistic from the word go and did not allow the English bowlers to settle into a rhythm. The duo also silenced the critics, with both batters scoring with a superb strike rate.

Needing to chase at 10 runs per over, Mohammad Rizwan made his intentions clear with two boundaries in the first over. In the third over of Sam Curran, Babar Azam also caressed two boundaries.

The mayhem continued in the remaining power-play overs, with the two taking Pakistan to 59/0 at the end of six overs. Rizwan and Babar both reached their fifties in 30 and 39 balls, respectively.

Moeen's choice to put himself on in an attempt to stem the flow of runs faltered, as the two openers hammered three sixes in the over to score 21 runs. Adil Rashid was treated with similar scorn after he was hit for two sixes in the 15th over.

After reaching his half-century, Pakistan's skipper became even more lethal. He scored his fifty in 39 balls, and only needed 23 more to achieve the three-figure mark. He became the first Pakistani batter to score two T20I hundreds with his 62-ball century.

The two-star openers stayed unscathed, chasing down the total with three balls to spare to draw the series 1-1.

Babar Azam was adjudged the 'Man of the Match' for his superb century.