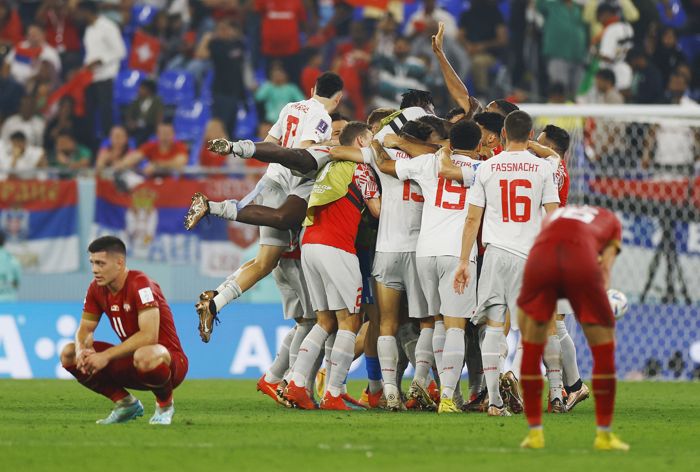 Switzerland have been flying under the radar, creeping up almost unnoticed to become part of the football elite, but Friday’s 3-2 win against Serbia at the World Cup showed that they were now anything but a neutral team.

The Nati defended when they had to, leaving little space for Brazil despite a 1-0 defeat, and produced some exhilarating attacking football against Serbia as Xherdan Shaqiri proved to be an excellent advertisement for the Major League Soccer.

While they have not made it to the quarterfinals of the World Cup since 1954, Switzerland will have absolutely nothing to fear when they take on Portugal in the last-16 stage on Tuesday.

They have now reached the knockout phase in every World Cup or European championship since 2014 and even if they have never gone past the last eight, they cannot be regarded as a surprise package anymore.

“It’s the best Swiss national team that ever existed,” coach Murat Yakin said before their opening game, a clinical 1-0 win against Cameroon.

Switzerland have had their fair share of talented players but when Stephane Chapuisat’s squad made it to the Round of 16 in 1994, and Alexander Frei and Co. also reached the knockout phase 12 years later, it was considered as a major achievement.

For the generation led by ‘pocket rocket’ Shaqiri, it is a minimum requirement, a springboard to greatness.

Aboubakar at it again

Lusail: A late goal by skipper Vincent Aboubakar ended Cameroon’s 20-year wait for a win at the World Cup as the Indomitable Lions bowed out in style by beating a much-changed Brazil 1-0 at the Lusail Stadium on Friday.

With qualification to the last-16 already in the bag after wins over Serbia and Switzerland, Brazil, seeking to claim the World Cup for the sixth time, still won Group G ahead of the Swiss on goal difference. They will face Group H runners-up South Korea in the next round.

“It’s a warning signal,” said the 39-year-old Dani Alves. “There is no weak rival. Here is the lesson, we need to stay switched on throughout the game.” — Reuters