Lahiri heads to Tokyo after tied-3rd finish in USA 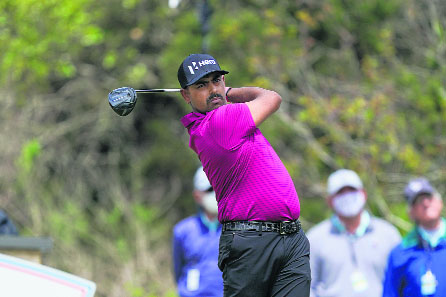 Anirban Lahiri achieved his season’s best result on Sunday, a tied-3rd finish in the USA.

Just in time for his second Olympics, Anirban Lahiri achieved his season’s best result on Sunday, a tied-3rd finish at the Barbasol Championship on the PGA Tour in Kentucky, USA. Five years ago at Rio, Lahiri had finished a disappointing 57th in a field of 60. He aims to make amends in Tokyo, for he believes that an Olympics medal would give the sport a huge boost in India.

“I think it would change the way golf is perceived in India. It would have similar impact to winning a Major even,” said the 34-year-old on Sunday.

In the women’s category, Aditi Ashok will also be participating in her second Olympics — her result in Rio was a disappointing 41st, and she too hopes to do much better in Tokyo.

Don’t expect medals from the three Indian swimmers at Tokyo, for India is far from world-class in the sport. But what two of them have achieved is already historical — Sajan Prakash and Srihari Nataraj have achieved the feat of ‘A’ category qualification, something that has been impossible for Indians.

On June 26, Prakash timed 1 minute 56:38 seconds in 200m butterfly at an event in Rome, thus becoming the first ever Indian swimmer to make the Olympic Qualifying Time (also known as FINA ‘A’ cut). This ensured automatic qualification for him for Tokyo.

Three days later, Nataraj became the second Indian to make the ‘A’ cut, timing 53.77 seconds in 100m backstroke at the same event. Two ‘A’ qualifications in three days is historical — in the past, unable to make the ‘A’ cut, Indian swimmers got to the Game through Olympic Selection Time (‘B’ time) or the universality quota.

Manipur’s Shushila Devi, who comes from a family of judokas, wanted to be the best in her family, and she’s achieved that — she’s going to represent India in the 48kg class in Tokyo.

The 26-year-old, who made to Tokyo on the basis of the Asian continental quota, has risen from the ashes. She had won a silver at the Commonwealth Games in 2014, and had hopes of doing well in 2018 as well — but an injury before the 2018 Asian Games led to her losing the trials. Shushila was crestfallen, falling into depression. She was sidelined for seven months and thought her career was over.

However, she got back into training, worked hard and won medals in 2018 and 2019. But money was a problem — she sold her car, a Maruti Suzuki Alto, to raise money to be able to compete.

Pranati Nayak, India’s sole representative in gymnastics at Tokyo, faces high expectations — the fourth place won by Dipa Karmakar in vault five years ago in Rio is the reason. Dipa, however, made it so high because of a dangerous and difficult vault she specialises in — the Produnova vault, which is worth more points than other vaults. Pranati, on the other hand, has been working on the ‘Tsukahara back 720’ vault, the fourth-highest rated vault for points awarded. It involves two-and-a-half rotations with twists, and Pranati hopes to make her name in Tokyo through this difficult manoeuvre. Winning a medal seems too distant a possibility — she is focusing on reaching the final and then giving it her best shot.

India will have three representatives in golf — Anirban Lahiri & Udayan Mane in the men’s event and Aditi Ashok in the women’s category. Lahiri and Aditi took part in the 2016 Rio Olympics too, while Mane represented India at the 2014 Asian Games. Lahiri is currently ranked No. 275 in the world while Mane is No. 377 and Aditi is No. 187.

Pranati Nayak would be India’s sole representative at Tokyo. Five years after Dipa Karmakar finished fourth in women’s vault at Rio, Pranati would hope to make a similar mark in Tokyo. That would not be easy. The 26-year-old Pranati has had little time to prepare and compete due to the Covid pandemic.

n In Vault, gymnasts run down a runway, bounce from a springboard onto the vault with their hands and perform a leap with a twist or turn and land on the other side of the apparatus.

Japan, China and Russia have strong male gymnasts while the best women are from the USA, Russia and China. Since Sydney 2000, China has won the men’s team all-around gold three times and Japan twice.

USA, Australia and European nations are very strong in swimming, while among Asian nations Japan and China are expected to fight for medals.

Shushila Likmabam in the women’s 48kg category would be India’s only judoka in action in Tokyo. The 26-year-old Manipuri had won silver in the 48kg class at the 2014 Commonwealth Games.

Japan has been traditionally strong, but over the years several other countries have become strong in the sport. France, Russia, Netherlands and Italy are strong, apart from South Korea, China, Mongolia, Cuba and Brazil.