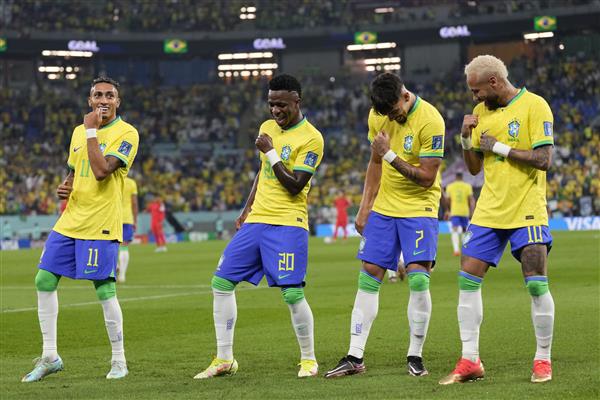 Brazil’s players have vowed to keep on dancing despite being criticised. Reuters

Brazil, however, could be even stronger in tomorrow’s last-eight clash with the 2018 runners-up as they will be close to full-strength after a number of injury problems.

With talisman Neymar and key defender Danilo returning against South Korea after missing two games due to ankle problems, coach Tite had to improvise and started right back Danilo on the left of the defence in place of injured Alex Sandro.

I believe that this match will be the most demanding one. I can compare it to the final against France in the previous World Cup. A great opponent and a great challenge for us. We have had 11 matches at these two World Cups and we lost one. —Nikola Dalic, Croatia coach

They have great quality and a lot of resiliency. Brazil will try to keep doing what has worked so far, and then we’ll see which team can advance. —Tite , Brazil coach

Tite is hoping to field his first-choice team against Croatia with full backs Danilo and Sandro in their natural positions, sending versatile centre-back Eder Militao back to the substitutes’ bench after impressive performances.

Neymar looked sharp in 80 minutes on the pitch against South Korea, scoring a goal and showing no signs that his right foot was bothering him.

He will have extra motivation against Croatia, as he is one goal away from equalling Pele’s record for the most goals scored for Brazil (77).

Neymar scored his 76th against South Korea and paid tribute to the 82-year-old former Brazil great, who is undergoing treatment for cancer, holding a banner in the middle of the pitch with ‘Pele’ written on it.

“It’s hard to talk about what Pele is going through, but I wish him all the best, I hope he gets back to good health as soon as possible and that we can comfort him with this victory and the banner we raised for him,” an emotional Neymar told a news conference.

After overcoming Japan on penalties on Monday following a 1-1 draw after extra time, Croatia face the huge task of facing Brazil and their five-man attack which blew away South Korea with four first-half goals.

Led by the experienced Luka Modric, Dejan Lovren, Ivan Perisic and Marcelo Brozovic, the 2018 finalists arrived in Qatar as one of the oldest teams there are concerns about the fitness and form of key stalwarts after the gruelling 120-minute game against Japan.

“I believe that this match will be the most demanding one,” Dalic told reporters today. “I can compare it to the final against France in the previous World Cup. A great opponent and a great challenge for us. We have had 11 matches at these two World Cups and we lost one. I wish this match came a bit later, I wish it waited for us later (in the tournament) but life is such.” — Reuters