Can India give a special farewell to cricketer Jhulan Goswami? : The Tribune India

Can India give a special farewell to cricketer Jhulan Goswami? 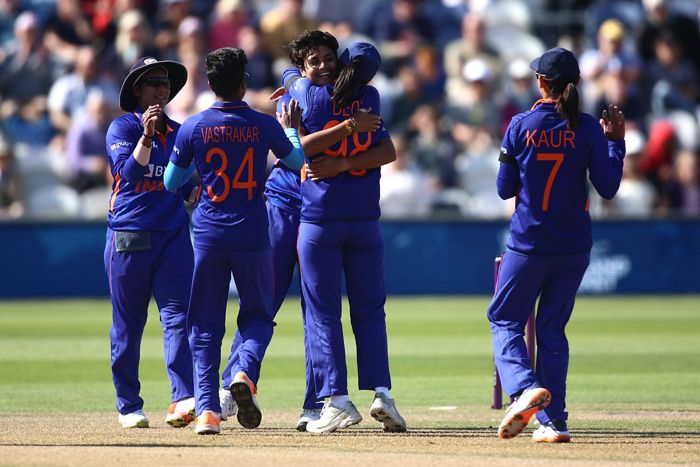 The last time India had won a series in England was back in 1999. file

A confident Indian team will back itself to seal its first series victory in England since 1999 with another win over the hosts in the second women’s ODI here tomorrow.

Having endured a woeful 1-2 defeat in the T20I series, the Harmanpreet Kaur-led team raised its standards in all the departments of the game to bounce back and defeat England by seven wickets in the series-opener at Hove on Sunday.

In 1999, the Indian team had won the ODI series 2-1. Anjum Chopra was the star back then striking a hundred and a half-century.

Though India looked a much better team in the first game, it must not be forgotten that England are missing some of their senior players.

This is also a farewell series for veteran Jhulan Goswami as India do not have any ODI assignment till June 2023.

Playing her first game since March, the 39-year-old, who is the world record holder for most wickets, showed little signs of rustiness and was the most economical among the lot as she returned with figures of 10-2-20-1.

Indian vice-captain Smriti Mandhana led from the front with a sublime 99-ball 91, while wicketkeeper-batter Yastika Bhatia also struck a fifty before skipper Harmanpreet finished off the clinical chase with an unbeaten 74.

Focus will also be on opener Shafali Verma, who has not scored a half-century in more than 10 innings.

England, on the other hand, will hope that their batters put up a big total as they will rely heavily on in-form Sophia Dunkley, who had a successful T20I series.

Dunkley and Alice Capsey once again looked dangerous in the middle before a one-handed catch by Harmanpreet broke the partnership and triggered a collapse. If India manage to win the second game, it will be a massive confidence booster for a team trying to find its feet in the limited-overs format. — PTI

Kuala Lumpur: India will meet arch-rivals Pakistan on October 7 in the Women’s T20 Asia Cup, scheduled to begin in Bangladesh’s Sylhet from October 1. Seven teams will take part in the 15-day tournament. The tournament will be held in a round-robin format, with the top-four teams qualifying for the semifinals. The teams playing in the tournament are India, Pakistan, Bangladesh, Sri Lanka, UAE, Thailand and Malaysia. India start their campaign on the opening day against Sri Lanka.