‘I’m excited to be back, am not focusing on Rafael Nadal-Novak Djokovic’ 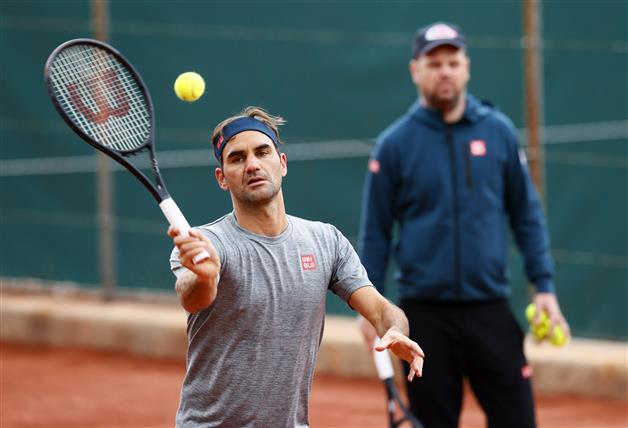 Roger Federer during a training session in Geneva. REUTERS

Roger Federer has said his focus is to be at a the top level once again, not to match the standards of Rafael Nadal and Novak Djokovic.

After last year’s two surgeries on his right knee, Federer renews his comeback here tomorrow — he did play in Qatar Open in March this year — and will go on to several tournaments, including the French Open, Halle, Wimbledon and then the Tokyo Olympics.

“I’m just concerned about where my game is at. The guys on tour are all in a good rhythm. The level that everybody is producing in great. I want to achieve that as well again,” Federer said.

His old rivals Djokovic and Nadal played out a two-hour 49-minute final in Rome on Sunday, with Nadal winning 7-5 1-6 6-3 victory to match Djokovic’s record of 36 Masters 1000 series titles.

“I’m excited about the comeback, that’s what my focus needs to be on and not about trying to be at the same level as Rafa and Novak right now,” Federer said.

But the 20-time Grand Slam title winner, who turns 40 in August, added: “I believe I will be part of the top tier.”

Federer, however, said that younger players such as Stefanos Tsitsipas, Andrey Rublev, Alexander Zverev, Daniil Medvedev and Dominic Thiem would all prove a much tougher challenge to him now.

“One thing is for sure, I would expect that the generation of Tsitsipas, Zverev, Rublev, Medvedev have all again gotten better naturally because they have more experience,” he said. “Dominic won a Slam in the meantime. Rafa, Novak are still where they are. You would think that the game has improved again. For me, that’s going to be an extra challenge, extra hard for me to find that level.”

Federer said he has never faced problems in switching from claycourts to grass and hopes his decision to play on his least favourite surface at the French Open will prove beneficial to his Wimbledon bid. Federer has not competed at Roland Garros in four of the last five years due to injuries and scheduling preference. — Agencies