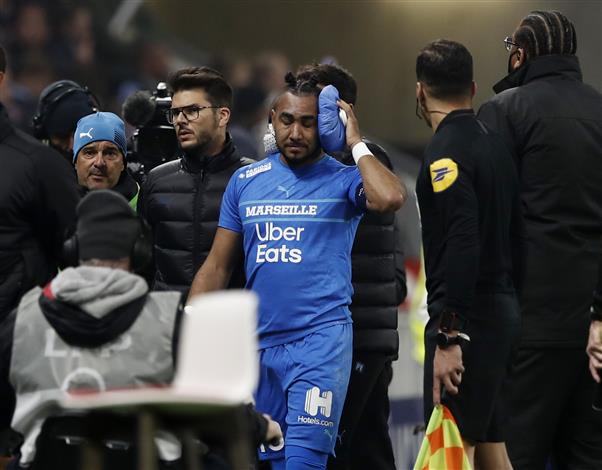 Olympique de Marseille’s Dimitri Payet walks off the pitch injured after being hit by a water bottle thrown by a fan. Reuters

The boos rang out as Tottenham’s players left the field after going a sixth straight half of play in the Premier League without a shot on target.

His team trailing 1-0 and being outplayed at home by an injury-hit Leeds, it dawned on Antonio Conte that he had a bigger job on his hands at Tottenham than he might have imagined.

The Italian’s half-time team talk made all the difference. Tottenham came out with much more intensity and delivered a second-half performance more in their new manager’s image as goals by two unlikely sources — Pierre-Emile Hojbjerg and Sergio Reguilon — secured a 2-1 win on Sunday.

“At half-time, the players showed me they could win this game,” Conte said.

Lyon: A French league game between Lyon and Marseille was abandoned after Marseille midfielder Dimitri Payet was hit on the head by a bottle of water thrown from the stands while he was taking a corner kick in the latest fan violence to strike French soccer.

Payet collapsed to the ground in the fifth minute of the match at Lyon, with the score at 0-0, but was able to get up after receiving treatment. The referee ordered players to head back to the locker room with play suspended.

After a wait of about 75 minutes, a stadium announcement said play would resume but warned that “the match will definitely be halted if there’s another incident.”

Lyon’s players jogged back onto the pitch after the announcement but Marseille players stayed in their dressing room, reluctant to resume the game, with Payet said to be shocked by the incident. About two hours after kickoff, it was announced that the game had been abandoned.

Milan: And then there were none. Serie A leaders Napoli lost for the first time this season as Inter Milan reinvigorated their Italian title bid with a 3-2 win on Sunday.

Margao: Spanish striker Igor Angulo struck twice in the space of three minutes as Mumbai City FC began their Indian Super League title defence in style with 3-0 win against FC Goa here today. Angulo continued from where he left last season with a fine outing, though against his former side, as he scored in the 33rd (penalty) and 36th minutes to help Mumbai City FC begin their campaign on a winning note. Brazilian Ygor Catatau (76th) then celebrated his ISL debut within minutes of stepping onto the pitch, closing the match for the City Football Group-owned club in their season opener. pti