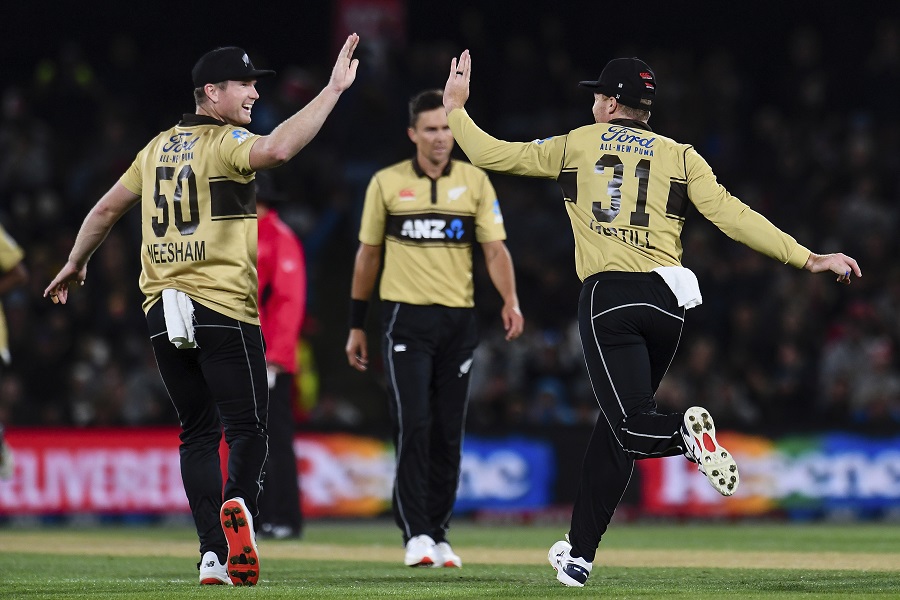 Devon Conway made 99 not out from 59 balls to lead New Zealand to a 53-run win over Australia on Monday in the first of five T20 internationals.

The South African-born Conway improved on his previous high score of 65 in T20 internationals, coming to the crease when New Zealand was 11-2 and leaving unbeaten when it was 184-5 after winning the toss and batting first.

Australia was all out for 131 in reply.

Conway came to the last over of New Zealand's innings 87 not out, took a single, hit a four and a six and was 98 facing the last ball of the innings but could only manage a single to be left just short of a maiden century.

Conway rebuilt the innings in partnerships of 74 for the fourth wicket with Glenn Phillips (30), 47 for the fifth with Jimmy Neesham (26), and 44 with Mitchell Santner (7).

“The wicket was a bit sticky at first but it got better and better as time went on and there were some good partnerships near the end there,” said Conway. “The key was just trying to stay positive throughout.”

“When I'm positive that's when I'm at my best. It was a matter of not trying to think too far ahead, just try to build good partnerships at the end,” he said.

Australia also was in trouble early, losing captain Aaron Finch in the first over and Josh Philippe, on debut, in the next over to be 8-2. Both fell to catches by Conway.

The New Zealand new ball pair of Tim Southee and Trent Boult were able to swing the ball under the floodlights at Hagley Oval — something the Australian bowlers couldn't do — and also captured the wicket of Matthew Wade to leave Australia 16-3.

When Neesham dismissed Glenn Maxwell (1), Australia were 19-4 and in deep trouble.

Mitch Marsh, batting up the order at No. 4, and Marcus Stoinis mounted a small revival, lifting the tourists to 56-5.

New Zealand leg-spinner Ish Sodhi then made a major contribution, removing Marsh (45), Stoinis (8), Ashton Agar (23) and Sams to finish with 4-28. Agar and Sams fell within two balls to catches taken by Kyle Jamieson behind square.

The Australian team has just emerged from two weeks in managed isolation, though they have recently been able to train at the Lincoln cricket facility in Christchurch.

The Australian team was named in the expectation top players such as David Warner and Mitchell Starc would be on a Test tour to South Africa but that tour was canceled because of the pandemic.

"It seems like it’s been a long time since we've played,” Finch said. “We didn't play our best tonight and New Zealand played well.”

“Conway truly deserved a hundred. They're hard to come by in T20 cricket and that was an absolutely great knock.” AP