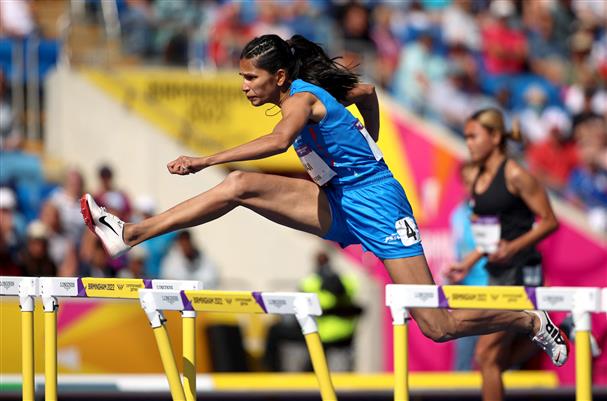 India's Jyothi Yarraji in action during a heat in women’s 100m hurdles at the Commonwealth Games in Alexander Stadium, Birmingham, Britain, on August 5, 2022. Reuters

The Indian men’s 4x400m relay team qualified for the final at the Commonwealth Games after finishing second in its heat race here on Friday.

India were fourth before the last leg bend but Amoj overtook two runners at the final stretch to finish second. He had suffered a hamstring injury while running 4x400m relay as part of the Indian quartet during the National Inter-State Championships in Chennai last month.

India finished sixth overall across the two heats with Botswana 3:05.11s being the quickest.

The final will be held on Sunday.

In women’s 100m hurdles, national record holder Jyothi Yarraji crashed out in the first round heats with a below-par show. She clocked 13.18m to finish fourth in heat 2 and 10th overall. She holds the national record of 13.04s.

The 22-year-old Yarraji had bettered her national record thrice this season.

Ancy Sojan also failed to qualify for the women’s long jump final. She was ranked 13th overall in the qualifying round with a best jump of 6.25m, which was wind-assisted (tailwind of 2.3m/s).

Those who touched 6.75m or at least 12 best performers across the two groups advance to the final.

The 21-year-old Sojan, who has a season and personal best of 6.55m, was seventh in Group A qualifying round.