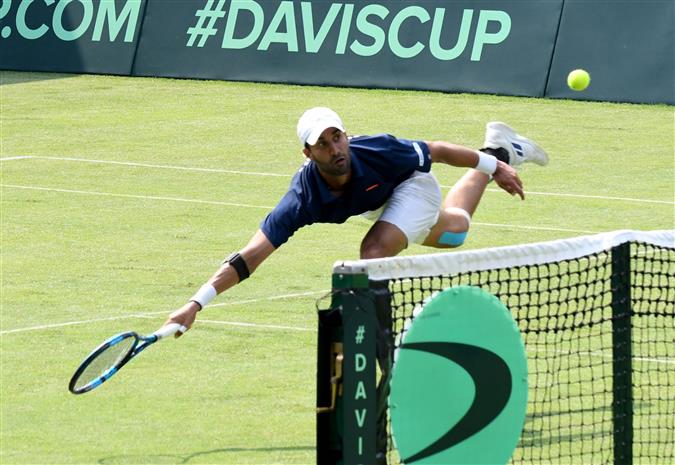 Except for the scenes at the Delhi Gymkhana Club, where the organisers’ lack of experience in holding major events showed in a host of issues, including a chaotic parking plan and a lackadaisical understanding of broadcast rules, Day 1 of the Davis Cup World Group Play-off 1 tie between India and Denmark worked like clockwork for the hosts.

After the two singles matches on the first day, India were sitting pretty with a 2-0 lead against the Danish team, which looked out of sorts on the grasscourt.

The dye was cast by Ramkumar Ramanathan early on in the encounter. Up against world No. 824 Christian Sigsgaard, Ramkumar used his backhand to open up the court at his disposal. Ramkumar, who had worked on his serve and volley game in the lead up to the tie, did not face a solitary break point. He served out the match with an ace to win 6-3 6-2 in less than an hour.

Yuki Bhambri, playing in the Davis Cup for the first time since 2017, beat Mikael Torpegaard 6-4 6-4 in the second match of the day. Primarily a baseline player, Bhambri struggled to cope with the bounce. Bhambri started well and went up 2-0 but a string of unforced errors had the Dane securing parity. But once Bhambri got back the break in the ninth game, there was no looking back. It was a tightly contested set in an otherwise one-sided affair on the day. For all of Torpegaard’s resourcefulness to fight on the alien surface, the Dane came up against an inspired Bhambri. The Indian upped his game with his forehand slices and occasionally finding the volleys to get out of trouble.

The next set was an exhibition of sorts, as the Delhi ace went 4-0 up and was looking to serve out the match in no time. A slight blip from the Indian raised the hopes of the Danish team as Torpegaard began finding his range from the baseline. From 1-4 down, Torpegaard fought his way back to 4-5. However, Bhambri served out the game to tighten India’s grip on the tie.

A disappointed Torpegaard confessed that he struggled to cope with the surface. “I think I ran out of time towards the end. I would love to have another set but that is wishful thinking,” Torpegaard said. “He played a lot of slices, both forehand and backhand, and I struggled. Props to him for playing traditional tennis on grass and being good at it,” he added.

“It was more a case of him stepping up his game when it mattered. This separates good players from great players. The games were super tight and I had chances but he stepped up. It is a bittersweet feeling,” he added

The doubles encounter will start the Day 2 proceedings. While non-playing captain Rohit Rajpal had declared that Divij Sharan would partner Rohan Bopanna, the eagerness of the hosts to kill the tie has thrown Ramkumar back into the mix. Rajpal conceded that they would go back to the team and decide what would be the best combination tomorrow.