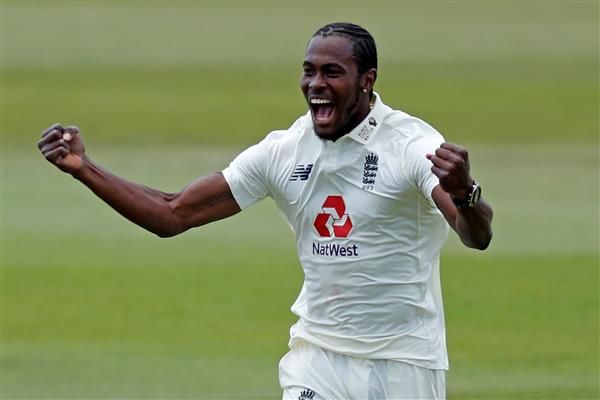 England pacer Jofra Archer was on Thursday dropped from the second Test against the West Indies for breaking the team’s bio-secure protocol and will now undergo two COVID-19 tests during a five-day isolation period.

Archer apologised for the lapse, which wasn’t specified in the England and Wales Cricket Board (ECB) statement but ‘BBC Test Match Special’ said that the speedster had visited his home in Brighton after the first Test.

The series is being played amid the COVID-19 pandemic and the first Test in Southampton passed off without any incident.

“Jofra Archer has been excluded from the #raisethebat second Test against the West Indies starting today (Thursday 16 July) at Emirates Old Trafford following a breach of the team’s bio-secure protocols,” ECB said in a statement.

“Archer will now commence five days of isolation and will undergo two COVID-19 tests in this period, which have to test negative before his self-isolation period is lifted,” it further stated.

The flamboyant bowler offered an apology and acknowledged the enormity of his indiscretion at a sensitive time.

“I am extremely sorry for what I have done,” he stated.

“I have put, not only myself, but the whole team and management in danger. I fully accept the consequences of my actions, and I want to sincerely apologise to everyone in the bio-secure bubble,” he added.

The BBC TMS twitter handle posted: “Confirmation from ECB that Jofra Archer went home to Brighton between  matches on Monday which breached the bio-secure environment.”

Archer conceded that he let down the England team which needed him desperately as it is 0-1 down in the series.

“It deeply pains me to be missing the Test match, especially with the series poised. I feel like I have let both teams down, and again I am sorry,” he said.

The ECB, in its statement, said the West Indies team is aware of the latest developments and is satisfied with the steps taken.

“The West Indies team have been made aware and are satisfied with the measures that have been imposed,” it stated.

The 25-year-old Barbados-born pacer has so far played 8 Tests, 14 ODIs and a T20 International for England. He has taken a total of 58 international wickets in his short career so far.

The three-Test series has marked the resumption of international cricket albeit in a bio-bubble with strict protocols in place.

Before the series started, West Indies head coach Phil Simmons had moved out of the bubble to attend his father-in-law’s funeral which was then questioned by some members in the cricket board, who demanded his sacking despite the fact that he took due permission for it.