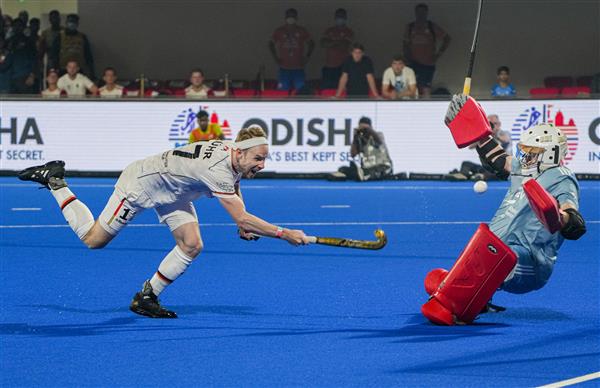 In hockey, Germany can never be written off, and England are never safe.

While Germany again proved that “it is not over until it is over”, England were left to ask the same question: how did they let another game slip away?

Leading 2-0 with three minutes left, England had the semifinals in their sights, but that “almost” never reached completion.

Despite struggling for most part of the 60 minutes in their quarterfinal, Germany still found a way to come back and win in the shootout.

“At this level, almost is not enough to beat teams like Germany and Australia,” England coach Paul Revington said.

Germany’s win brought back memories of their quarterfinal victory at the 2016 Olympics when they scored three goals in the last four minutes to beat New Zealand 3-2. This was also not the first time England faltered late in a match at the World Cup. In the bronze medal match in the 2010 edition in New Delhi, England let a 3-1 lead slip away to lose 3-4 against Netherlands.

Today’s result, though, would sting harder. For 57 minutes, England produced a tactical masterclass. Despite all the talk about the hockey team adopting ‘Bazball’ from their cricket counterparts, today’s match was all about England’s defence.

With a tight man-marking defence, England denied Germany any space to play their fast passing game, which is the platform for their push forward from the midfield to the attacking third.

“We had prepared for their man-to-man defence but they made it difficult on the field. We were also a bit slow with our ball movement,” German defender Lukas Windfeder said. “We were looking for passes in the zones but there were no spaces,” he added.

England were so effective that Germany hardly had a try in 55 minutes and earned just one penalty corner.

Their inability to play freely led to frustration, which was increased after England struck twice - through Zachary Wallace (11th minute) and Liam Ansell (32nd) — against the run of play. Soon after, Christopher Ruhr earned a yellow card to increase Germany’s difficulties. Despite much success, the German machinery kept going through the motions. They finally saw an opening in the 56th minute after earning a penalty stroke but Ruhr’s push deflected out after ramming against the horizontal bar.

“Obviously, that miss could have broken our spirit but we took two seconds to remove any doubt from our mind. We kept believing. We proved that it’s not over until the final whistle,” Windfeder said.

Within a minute, captain Mats Grambusch found the back of the net. Already playing with 11 outfield players, Germany’s numerical advantage increased after Wallace was shown a green card. Germany earned another penalty stroke after a review, and this time Tom Grambusch made no mistake. Germany could have finished off the game in regulation time after earning a penalty corner but England made a desperate block.

The shootout went perfectly for Germany. They scored from the first four attempts - noticeably, Ruhr showed courage to raise his hand after the penalty stroke miss and converted on the second try after his initial shot was blocked by the goalkeeper.

England missed twice and failed to reach the semifinals for the fourth successive time. Germany will next play Australia.

In today’s other quarterfinal, Netherlands beat South Korea 5-1 to set up a clash with Belgium.