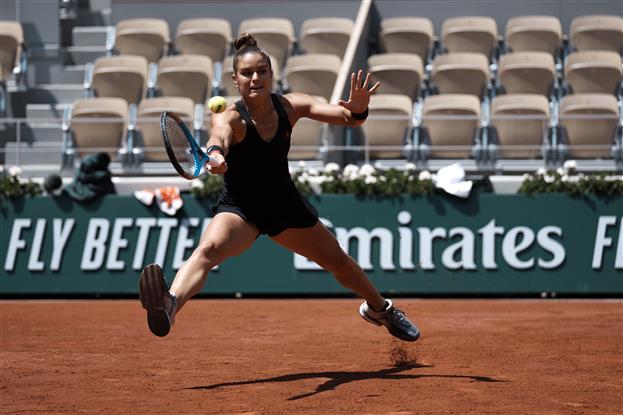 Unseeded Barbora Krejcikova reached the semifinals of the French Open on her fifth appearance in a Grand Slam main draw as she beat a nervy Coco Gauff 7-6(6) 6-3 today.

The 33rd-ranked Czech saved five set points as she recovered from a slow start and benefited from her 17-year-old opponent’s lack of composure to book a meeting with Maria Sakkari after the defending champion Iga Swiatek lost 6-4 6-4 to the Greek.

It was the 25th-seeded Gauff’s first quarterfinals at a Major and after a promising start the American appeared to crumble under pressure, making 41 unforced errors as she served seven double faults.

Krejcikova is looking to become the first player from the Czech Republic to lift the Suzanne Lenglen Cup since Hana Mandlikova in 1981.

Almost 5,000 spectators — up from 1,000 until then — were allowed on a sun-kissed court Philippe Chatrier as Covid measures started to ease today.

“Thank you so much, it was amazing, we were more pumped. Thanks for cheering,” Krejcikova said on court. “I had never dreamed of being here on this court, reaching the semifinals. I was behind in the first set but decided to go for every ball and just enjoy myself.”

Fifth seed Stefanos Tsitsipas beat world No. 2 Daniil Medvedev in straight sets on Tuesday to advance to the semifinals for the second straight year and end the Russian’s surprise run on the Parisian clay.

The Greek avenged his Australian Open semifinals loss to the Russian this year and improved his Grand Slam quarterfinals record to 4-0 with a 6-3 7-6(3) 7-5 win that teed up a last-four clash against Germany’s Alexander Zverev.

“It was a very close match and we both served pretty well,” Tsitsipas said.

Alexander Zverev settled some early nerves before beating Spain’s Alejandro Davidovich Fokina 6-4 6-1 6-1 on Tuesday to reach the semifinals for the first time.

After his frustration wore off following an early argument with chair umpire Alison Hughes over a line call, Zverev clicked into gear while an increasingly despondent Fokina wavered. — Reuters

PARIS: Rafael Nadal’s French Open set streak is over. His pursuit of a record-breaking 21st Grand Slam title — including 14 at Roland Garros — remains very much intact. Nadal shrugged off dropping a set in Paris for the first time in two years and regained control, whipping violent forehands punctuated with fist pumps and yells of “Vamos!” en route to a 6-3 4-6 6-4 6-0 victory over 10th-seeded Diego Schwartzman to reach the semifinals at the clay-court Major tournament. Nadal, who turned 35 last week, is now 105-2 for his career at Roland Garros. He is just two wins from eclipsing the men’s mark for most total Grand Slam singles championships that he currently shares with Roger Federer. In addition to his 13 trophies at Roland Garros, he has won four titles at the US Open, two at Wimbledon and one at the Australian Open.