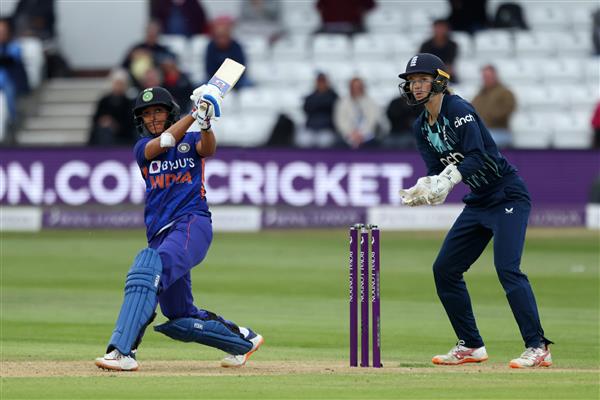 Skipper Harmanpreet Kaur smashed a scintillating unbeaten ton to power India to a comprehensive 88-run win in the second ODI that sealed the team’s first series win against England since 1999.

When I debuted she was a leader and I learned a lot from her and now our young bowlers, like Renuka (Singh) and Meghna Singh, they are also learning from her — Harmanpreet Kaur on Jhulan Goswami

A vintage Harmanpreet rekindled the memories of the 2017 World Cup, when she had smashed an unbeaten 171 against Australia in the semifinals. Against England, a magnificent 143 not out – her second-highest ODI score – came off just 111 balls as India put on board a mammoth 333/5.

Canterbury: The series already in the pocket, the Indian women’s cricket team captain Harmanpreet Kaur wants to give a grand farewell to veteran pacer Jhulan Goswami by winning the “special” final ODI against England at the iconic Lord’s in London on Saturday. Goswami, 39, is set to bid the game adieu after a glorious career of over two decades, and Harmanpreet feels a series sweep would be the perfect gift to the fast bowler. “The Lord’s game is very special for us because it’s Jhulan’s retirement and we wanted to enjoy that game without any pressure and I’m really happy that we were able to win today and now we can just have fun in that game,” she said. “It’s very important (to win) because that will be her last game.” PTI

India then bundled out England for 245 in 44.5 overs, with medium-pacer Renuka Singh claiming four for 57 on Wednesday night.

Danni Wyatt’s 58-ball 65 was the lone bright spot in an otherwise dismal show by the England batters.

Chasing the imposing total, what England needed was a brisk start, but Renuka had other plans as she dismissed two top-order batters in Emma Lamb (15) and Sophia Dunkley (1).

Tammy Beaumont (6) was run out as the hosts were reduced to 47/3 by the end of the eighth over.

Alice Capsey (39) and Wyatt stitched 55 runs for the fourth wicket and then Wyatt shared another 65 runs with skipper Amy Jones (39) before England’s chase fell apart as Renuka cleaned up Wyatt in the 30th over. Towards the end, Charlie Dean (37) and Kate Cross (14) tried their best but it was too big a task for them and India went on to record a magnificent win.

After India were sent in to bat, Harmanpreet smashed 18 fours and four sixes in her knock, enjoying a fine 112-run stand for the fourth wicket with Harleen Deol (58 off 72 balls). She also added 50 more with Pooja Vastrakar (18) and another 71 runs in four overs with Deepti Sharma (15 not out) for the unbroken sixth-wicket stand.

It was in the last three overs that Harmanpreet took the game away from England’s grasp, and the 334-run target looked beyond England’s reach, even though the pitch was perfect for batting.

In the last three overs, the Indian team scored 62 runs, courtesy the skipper, who was in imperious touch while reaching her fifth hundred in ODIs.

5ODI hundreds for Harmanpreet, the joint second-most by an Indian woman. Mithali Raj leads with seven, while Smriti Mandhana also has five

390.91 Harmanpreet’s strike rate after she completed her century. She hit six fours and three sixes to get 43 runs off 11 balls