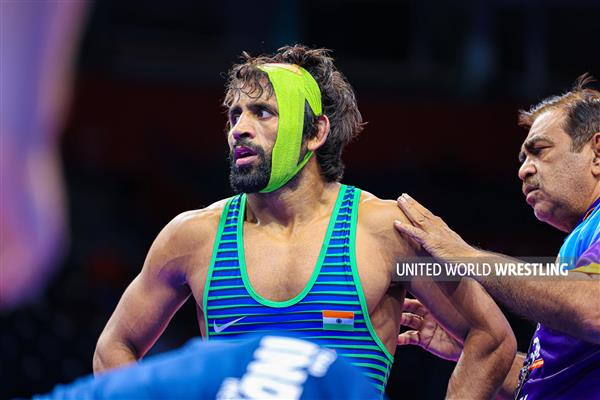 Olympics medallist Bajrang Punia has accomplished a lot in amateur wrestling over the years. His latest medal, a bronze, at the World Championships in Belgrade made him the only Indian to win four medals at the event. Speaking to the Tribune, the 28-year-old from Jhajjar opened up about missing out on gold again and the criticism faced by Indian athletes. Excerpts:

We had roughly 20 minutes to clean up and control the bleeding. Normally it would have needed a few stitches but then you run the risk of disqualification as the wound may open up again in a bout — Bajrang Punia

There is no denying that winning a medal makes you happy. I have said this often, my goal is to return with a medal every time I represent my country. I think I was the only one who had three World Championships medals. But I did not approach this event thinking I will better that record. But I could have done much better if not for the head injury.

You have come close to winning the gold. Do you feel there is unfinished business?

It is a fact that we have only one World Championships gold medal (won by Sushil Kumar). I am working very hard to achieve that goal. I have come close twice already. My 2018 final (against Japan’s Takuto Otoguro) was stopped several times, and a six-minute bout was allowed to extend to 12 minutes. My 2019 semifinal loss (against Daulet Niyazbekov) was controversial and the international federation (UWW) agreed that the standard of the refereeing was not up to standard.

How badly did the head injury affect your chances?

A lot was happening when I got injured (against Cuba’s Alejandro Enrique Vlades Tobier). We had roughly 20 minutes to clean up and control the bleeding. Normally it would have needed a few stitches but then you run the risk of disqualification as the wound may open up again in a bout. My physiotherapist (Dr Anand Kumar) requested the wound to be taped. They (UWW) used a rigid tape, which is mostly used for knee and ankle. The tape did not impact my wrestling per se but it hurt when it needed to be changed as it was all over my hair and beard. I am not saying that I would have won the gold surely, but the injury did slow me down.

Vinesh Phogat made a passionate plea that Indian athletes are not robots and must be treated with respect as winning and losing is part of the sport. Do you endorse this view?

I totally support what Vinesh has said. I said the same thing after the Tokyo Olympics. It is easy to criticise athletes when they fail. The same people who criticise the athletes by saying ‘his career is over’ will post saying ‘see how he or she has answered the critics with a medal’. People have to understand the fact that athletes who do not win medals also need some kind of support as they have worked hard to represent the country.