He's got the support of all the players: Harris on Paine joining squad ahead of Ashes 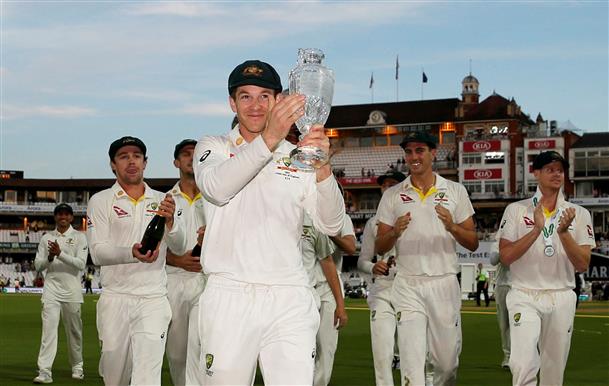 Australias Tim Paine celebrates with the Ashes trophy after drawing the series to retain the Ashes . Reuters file

Australia batter Marcus Harris is confident that Tim Paine has the support of all the players, saying that the former Test skipper and head coach Justin Langer are yet to address the squad.

Harris also revealed that the playing group found out of Paine's decision to step down just 30 minutes before he faced in the media on Friday.

"There wasn't much time to digest it, but it was a shock," Harris told reporters on Wednesday.

"Tim's obviously been a greater leader around the group, he's always been really good to me and my family - our hearts went out for Tim, and Bonnie, and the kids and his family.

Paine stepped down as Australia's Test skipper on Friday after it emerged that he had sent unsolicited explicit image of himself along with a string of lewd messages to a female co-worker in 2017, months before he was made captain.

"He's done a really good job in the last few years, under tough circumstances. You'd probably still argue that he's still the best gloveman in the country, and he still played some really important innings last summer against India.

"I know he's got the support of all the players," said Harris, who has played all his 10 Tests under Paine's captaincy.

The Test opener said the players have reached out to the wicketkeeper individually but Langer and Paine haven't addressed the squad directly.

"Probably everyone's spoken to him personally, I sent him a message the other day and spoke to him a little bit. Obviously Painey's a very popular member of the group." Paine, who had gone under the knife to fix a bulging disc in his neck in September, is the only stumper in Australia's 15-player squad for the Ashes, which was announced before he stepped down.

The development comes weeks ahead of the five-Test Ashes series against traditional rivals England. The first Test begins in Brisbane on December 8.

Harris is confident there are several players in the squad who can step up and lead the side.

"People were a bit shocked, but we've got leaders around our group - so it's not ideal, but someone's going to have to step up and lead from the front and there's plenty of people who can do that job." Paine is expected to play an intra-squad match, starting December 1, but there still isn't clarity if he will be included in the playing XI after the recent developments. PTI