Netizens took to social media to share some amazing videos and pictures. 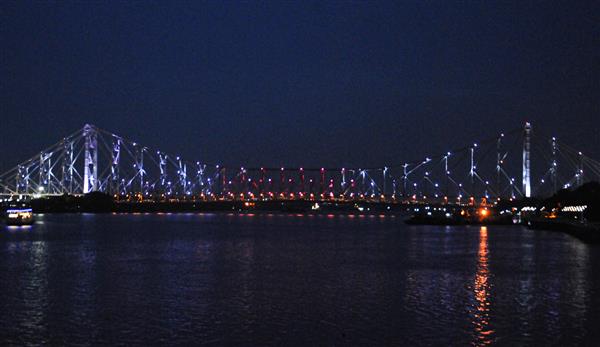 The iconic Howrah Bridge over Hooghly River shimmered in Olympic colours on Monday evening, making it a spectacle to watch for millions of people in the city, even as netizens took to social media to share some amazing videos and pictures.

An initiative of the Syama Prasad Mookerjee Port, Kolkata, under the Ministry of Ports, Shipping and Waterways, the gesture aims to build the momentum ahead of the mega sporting event, scheduled to commence on July 23.

A short video posted by Syama Prasad Mookerjee Port said, "Today Howrah Bridge or Rabindra Setu dazzles in colours representing the confluence of the world's greatest athletes from the five continents at the Tokyo Olympic Games. The five interlaced rings -- blue, yellow, black, green and red -- are the Olympic symbol, which epitomise the union of the five continentsÂ…" "Celebrating the sporting spirit at the greatest sporting arena, Take a glimpse of the dazzling and radiant Howrah Bridge immersed in the colours of #Olympics wishes the Indian Contingent a grand success at #TokyoOlympics," tweeted Syama Prasad Mookerjee Port.

Celebrating the Sporting spirit at the greatest sporting arena,

Mopsw wishes the Indian Contingent a grand success at #TokyoOlympics

More than 11,000 athletes are competing in the quadrennial showpiece, with India sending 127 athletes who will compete in 18 disciplines.