If you want to sweep, you sweep: Rohit reveals art behind playing Moeen & Co from rough 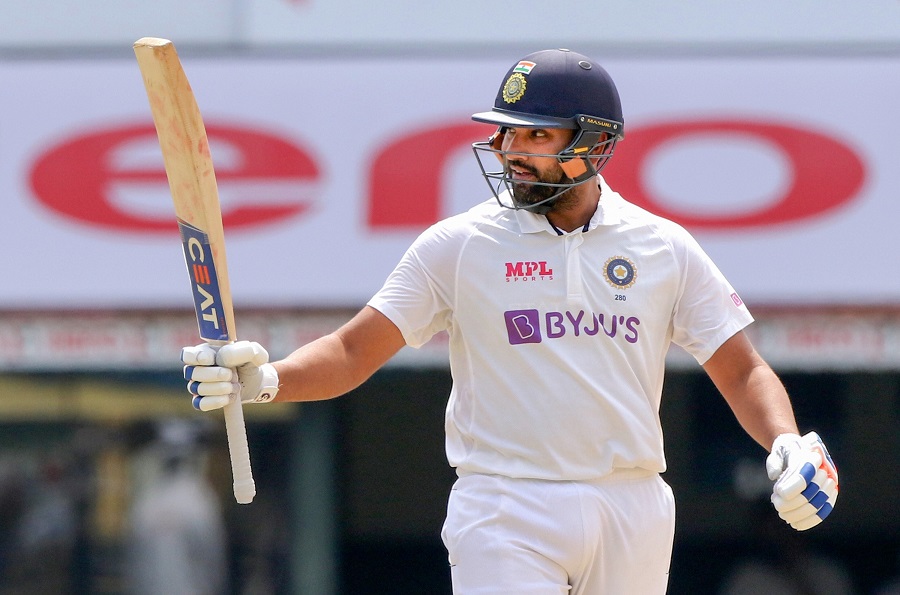 India’s Rohit Sharma celebrates his century against England on Day 1 of their second Test at MA Chidambaram Stadium in Chennai on Saturday. BCCI/PTI

India opener Rohit Sharma is very clear in his mind that even an iota of doubt while playing the sweep shot on a rank turner could lead to inevitable trouble.

With one of the best exhibitions of sweep shots played at the Chepauk since Sachin Tendulkar's valiant 136 against Pakistan in 1999, Rohit has put his team in a commanding position on a track that is deteriorating pretty fast.

England know a tough task await them in the second Test, which started here on Saturday.

"Before it's too late, you start doing what you want to do and you can't be tentative. If you want to sweep, you sweep it," Rohit's statement had a touch of Mexican bandit Tuco Ramirez's famous punch line – “When   you have to shoot, shoot, don't talk” from the Hollywood classic 'The Good The Bad The Ugly'.

Having watched Joe Root slay the Indian spinners in the first Test, it was like a ready reckoner for Rohit, who had prepared well during the last two training sessions.

"We knew how the pitch was prepared and we knew that it would turn. So we had a good few training sessions before today and trained according to what we were supposed to expect today," he said.

"When you play on turning pitches where you have to be pro-active and you can't be reactive. Getting on top of the bowler and making sure you are ahead of him. Little adjustment based on that.

"If it's turning, then how much of it... things like that before making decisions on shot selection," said Rohit.

Moeen Ali had troubled the Indian batsmen in the past and for Rohit, it was imperative that England's senior off-spinner needed to be swept from the rough to negate any chance of a leg before decision.

"What helped me was preparation I had before the game. Understanding the line that Moeen Ali was bowling. He was bowling into the rough, so there is a slight chance of getting leg before decision," he explained.

"Also I saw the deep square leg was pushed back, so even if I top-edged it wouldn't carry and land in safe place. Those were my ideas and thoughts."

According to Rohit, sweep is a percentage shot, which takes the condition of the pitch out of the equation.

"Sweep shot is something that you know can frustrate a bowler if you are playing that very well. If you play that shot, there is not much that the bowler can do from there or pitch can do from there.

"It was a percentage shot to play as he was bowling outside off-stump and lbw doesn’t come to play. Only an odd ball he was bowling on the wicket where I wanted to use my feet and cover the spin while reaching towards the ball."

In the case of left-arm spinner Jack Leach, it was about presenting a straight bat.

"Leach was bowling stump-to-stump, so it was important that I play with the turn. It was important to play with a straight bat as the turn was slightly angled. I was making sure that I push the ball between cover and point and rotate the strike.

"Once you rotate strike, it’s not easy for a bowler to bowl to a different batter every time. I wanted to bat as long as possible since the pitch is going to show a lot of wear and tear from days two and three."

The 'Hit-Man' didn't want to rate any of his hundreds even though he would know in his heart that this would be the top most among his seven three-figure marks.

"I am not the person to rate any of my knocks. Little disappointed to get out like that but happy that team is in a good position," he said. PTI