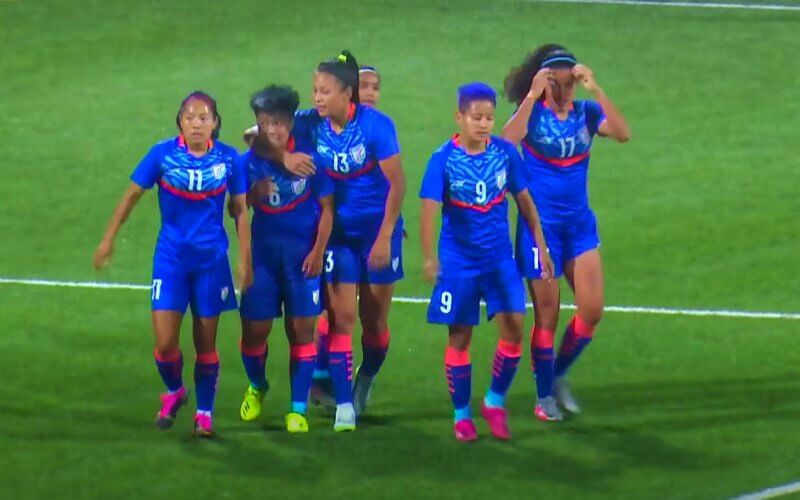 Priyangka Devi scored the solitary goal as the Indian women’s football team registered a 1-0 win over lower-ranked Egypt in the first friendly at the Prince Mohammed Stadium here on Wednesday.

It was Priyangka’s first-ever goal for the Blue Tigresses against 95th-ranked Egypt.

The first half began with the Indian side pressing hard to seize the initiative. Captain Ashalata Devi tried to earn an early lead in the 18th minute via her shot from distance but Anju, who latched on to the ball, missed the chance.

Couple of minutes later, Manisha almost scored the first for the night through Dalima’s pass from the right but was collected by the Egyptian custodian.

Before the opposition could settle into the game, a sudden strike by Priyangka in the 30th minute gave India the early lead, and remained the only goal of the match.

Dalima managed to pass the ball to Priyangka after Manisha essayed a brilliant cross from the left and eventually, the young midfielder found the back of the net. The half time score therefore read 1-0 in favour of India.

The second half was played out on similar lines with India creating more chances, as head coach Thomas Dennerby made his first change at the restart, replacing forward Renu with Pyari Xaxa.

Ten minutes after the resumption, Pyari came close to scoring in the 53rd minute as she got on the end of a cross from Manisha with an excellent run, but the shot was saved by the keeper.

Couple of more substitutions followed as Sandhiya came on in place of Anju Tamang, and Soumya and Ratanbala were introduced in place of Grace and Priyangka Devi respectively.

The prolific captain Engy Ahmed Sayed tried her luck from close range before the hour-mark, but Sowmiya stood tall to deny her confidently.

Hayam Abdellatif had the final effort for Egypt in the dying minutes of the game but her effort landed safely into Sowmiya’s gloves.

The last change was made by Dennerby at the final minutes of the regulation time when Manisha was replaced by Mariyammal.

The match soon came to an end as India earned their first victory in Jordan.

This is the first match since the national team was forced to withdraw from the group stage of the AFC Asian Cup, which India hosted in January-February, after it failed to field a team due to a COVID-19 outbreak inside its bio-bubble in Mumbai.