Inter crowned champions of Italy for first time in 11 years 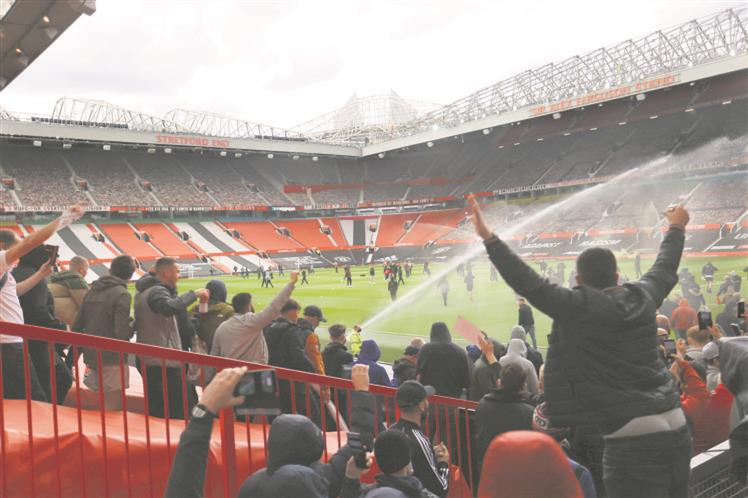 Manchester United’s fans protest against their owners before the team’s match against Liverpool on Sunday. Reuters

Inter Milan clinched their first Serie A title in 11 years on Sunday after Sassuolo drew 1-1 with second-placed Atalanta to assure Antonio Conte’s side of the league crown. Inter are 13 points clear in first place with four games remaining, and their triumph ends a run of nine consecutive title wins for Juventus. Large crowds of flag-waving fans gathered outside the iconic Duomo in Milan to celebrate a long-awaited success that has broken the domestic dominance of rivals Juve.

The league title is Inter’s first since winning the Serie A, Coppa Italia and Champions League Treble in 2009/10 under Jose Mourinho, and their 19th overall. Inter have therefore overtaken AC Milan, who have 18 Serie A titles, to become the second-most successful club in league history behind Juventus, with 36 league wins. Inter are unbeaten since January 6, a run of 18 games. — Reuters

Manchester: Manchester United supporters stormed into the stadium and onto the pitch, leading to the postponement of the team’s game against Liverpool today, as thousands of fans gathered outside Old Trafford to demand the Glazer family ownership sells the club. Long-running anger against the American owners has boiled over after they were part of the failed attempt to take United into a European Super League as well as the club’s debt.

Arsenal cruise to 2-0 win at Newcastle

London: Mohamed Elneny and Pierre-Emerick Aubameyang scored either side of halftime as Arsenal cruised to a 2-0 away victory over Newcastle United in the Premier League.

Barcelona: Atletico Madrid needed a goal by Marcos Llorente and a penalty miss by Elche in injury time to grind out a 1-0 win and ensure they stayed at the top of the Spanish league. Real Madrid stayed two points back after late goals by Eder Militao and Casemiro defeated a feisty Osasuna 2-0 on Saturday. Agencies