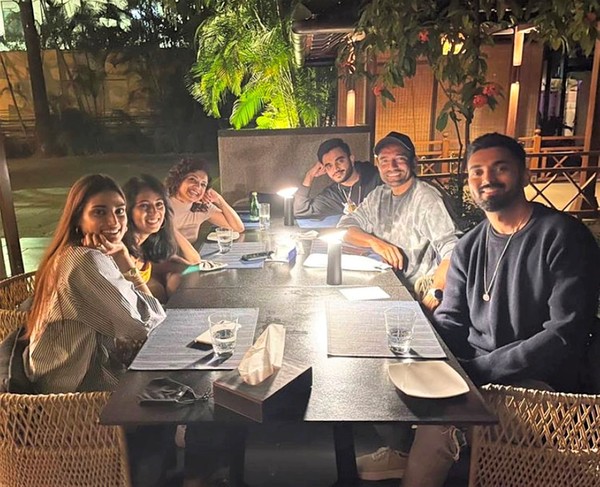 thiya and Rahul sitting across each other while Shhethal, Robin, Sinan Kader and others can be seen by their side. — File Photo

Cricketer KL Rahul and Ahan Shetty, son of actor Suneil Shetty, were spotted on the streets of London.

Rahul, who is rumoured to be in a relationship with Ahan's sister-actor Athiya Shetty, took to Instagram to share pictures with Ahan.

Rahul and Ahan were seen wearing all-black outfits with white sneakers. Rahul added a dash of colour to his look by adding an orange cap.

“Happy vibes @ahan.shetty,” Rahul captioned the pictures of him. The pictures received a lot of love online.

Cricketer Sinan Kader commented, “What a vibe,” along with a fire emoji. Fashion blogger Usaamah Siddique wrote, “MIB,” perhaps referring to ‘Men in Black’. Fans reacted as well. One called them ‘jeeja Sala (brothers-in-law)’, while another said, “Finally you have posted.”

Athiya has only appeared in two films - Mubarakan and Motichoor Chaknachoor - since she made her Bollywood debut in 2015 with Hero.

Tough times made me stronger but needed calm and clarity: Shikhar Dhawan

Scores 79 in the fiest ODI against South Africa